The first winds of the fall season took full effect on Wednesday 18th October at my place of work, not that they were the strongest winds that I have encountered but the California Pepper tree that was planted in the grass median did not fair well. The fact that it had been planted over an existing foundation left very little room for the root system to drive deep to secure a sturdy foothold and the constant watering of the surrounding grass only made for the underlying soil to turn to mush. This was quite evident by the way the surface roots were flexing and it was only a matter of time before this superb tree would fall to the ground. The supporting poles that had been placed for that same said reason last year had already cracked at the base and to add additional poles would have been futile considering the stability of the under soil.

As I pulled into the parking lot that day I had an inkling that today would be the day that it would fall. The root system was more prominent than usual, probably due to the prevailing winds and I thought to myself that it would not be possible to save this tree if it fell, the weight would be too great to lift and support it back in place. I made a mental note to myself, when it does eventually fall I would have some of the cuttings for my carving projects, when the chain saw is called to reduce this tree to logs.

Three hours after I set foot on the premises the tree was over, within the hour the electric chain saw had started to reduce this once large tree to a mass of branches and of course I asked If I could have a limb that was about five inches in diameter and four feet long. This would be more than enough to support a good few carvings, after all, I already have several large logs in various stages of drying out already situated in my garage.

I must admit, I am quite curious as to how it will carve and what type of grain it will have. The size of limb was important as the small Grizzly bandsaw that I have can only support a six inch cut at best without adding extension blocks, even so this will still be a challenge to cut.

I was totally shocked by the amount of moisture that was in this piece, proving to me how saturated the soil really was, it was soaking up this moisture as fast as it could. The weight of the limb must be in excess of fifty pounds meaning the drying out time will probably be a good six to twelve months. 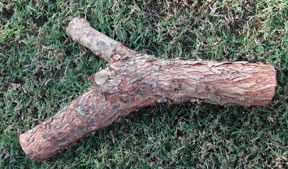 The good thing about drying in my unheated garage is the lack of unforced heat, this will certainly help to prevent cracking of the timber is this situation. The temperature will remain reasonably constant over the winter months as the temperature does not fluctuate too much near the beach and with the return of higher temperatures next year it should be ready for cutting next summer. Retaining the bark will help to control the moisture lost to the ends of the limb and gravity will play its part in dispersing the sap to the bottom.

Eventually the area that once held this tree will grow over with grass and the scar in the ground will be healed. As for the other trees, there are a few in as much distress and will have to be removed and replanted for them to achieve their full potential, this winter may be the ideal time, if not I may fall lucky again.