With the integrity of the structure now assured I can now strengthen the upper level of the Jungle Fort before placing in the decking. The first task was to bolt in all the upper beams that would provide support for the slats that would make up the walls and provide support for the additional structures such as monkey bars, rock wall and swing set. These cross members were drilled to accept the large 5 inch coach bolts leaving no doubt that they were there to stay.

During the construction I had changed the design so that the largest beam would be on the left side overhanging the front and rear of the Jungle Fort. This would provide enough space for a rope ladder and possibly a disc swing if we decided to go that route but as of now that decision has still not been finalized. I couldn’t ponder on this issue too long with this beam being a structural part of the fort so I just had to make provision for the additional items, on the assumption of, that is what we’ll do. In the event that we decide not to go that way I can either cut off the additional length that overhangs or leave it as it is. The optional length of this beam also needed a brace to prevent sway, this was placed underneath and installed with lag bolts but again this is easily removed if in fact it isn’t used. 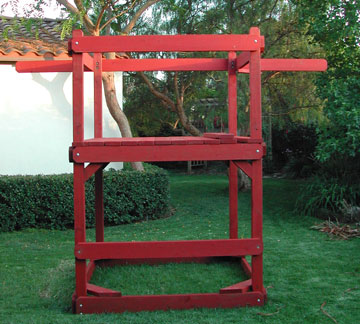 As you can see from the photograph the overhang front and rear is quite substantial and easily will accommodate the disc swing and rope ladder. On the right side of the cantilever beam you can just make out the brace placed underneath to prevent sway.

My next task was to start installing the decking and it was at this stage that my son wanted to help. Not only was I stressed about letting him help due to the danger involved in placing him on the deck without the sides fully enclosed but it also disrupted my trail of thought so I was not completely focussed.

The trail of events that followed required additional time to remedy even though the end result is the same but maybe not as pleasing to the eye. First off, I quickly placed the deck boards into place so that it would be safe for my son to sit on without fully consulting the instructions and it was at this stage that I made a major mistake. I installed the first board with the cutout for the front upright from the inside instead of the front outside and it didn’t dawn on me until much later, after all the boards had been screwed down and even modified. I did the same for the rear board, fitting from the inside instead of from the outside. I knew something was not quite right because the cutout for the front center upright was not placed correctly on the front board but I fixed it in anyway. Secondly the final board did not fit into the remaining gap so I promptly reduced it on the table saw. I should of stopped right there and then after two red flags had gone up but for some reason I just carried on. It was probably the fact that I was majorly concerned about my sons safety ensuring that he stayed in the center of the platform.

During this time my son was helping by placing the screws into the pilot holes so I could tighten with the drill gun. To my relief, the sooner the boards were screwed down the more relaxed I became especially once I got him down to ground level. The fact that he was able to help thrilled him no end but I must say that I wouldn’t recommend it, I must of put on a few more years and extra gray hairs before I was finished.

At the end of screwing the deck down I was still puzzled over the misalignment but now I was moving forward to install the fort wall on the swing set side, the right side of our fort platform. I had made a mental note that I would cutout the hole for the front upright later as the one that I had cutout was no longer in the right place, anyway I had to cut out extra slots for a further two uprights because I was also installing the slide on the front face. I needed to close the gap in the front of the platform between the ramp and the slide. With that rationale I moved forward without a second glance at the instructions on installing the deck. 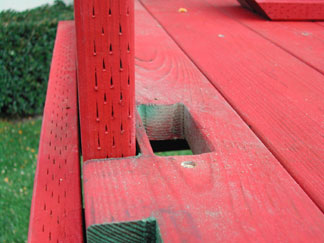 As you can see from the photograph, if I had just stopped to rethink the situation it would have been a simple case of reversing the board but the only positive thing that came out of this is, it was easier to cutout the additional slots as the front face was open. I also had to look into cutting out a slot in the deck for the Monkey Bar support on the left side, a reversal to the original plans.

With the cutout for the Monkey Bar support now being on the left side I also had to transfer the cutout for the upright that would support the additional cross member for the slats, this would enclose the remaining hole. So what I have here is a complete reversal of the instructions together with the labeled material. I knew this part of the construction would be confusing especially with all the timber labeled and in piles. What I was going to have was the left hand side materials were going to be fitted into the right side and vice versa.

I was spending a lot of time consulting the instructions trying to work out in my mind the best configuration for all the elements even though I had already decided what we were having, I just didn’t want to cut out additional holes in the deck and find out that it wasn’t needed. After pondering on this for half an hour I decided to move forward and start constructing the upper wall on the swing set side. This is one area where nothing changes, an additional cross member to support the slats and add in the swing set supports. A job to move forward on without too much design concern. 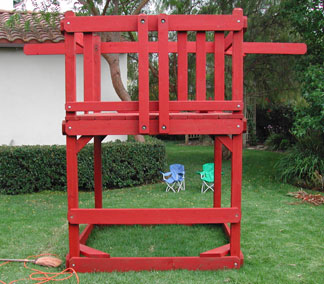 As you can see from the image I had plenty of supervision from my children, their chairs placed just in the right place so that they could observe everything that was going on without getting in harms way. A day that proved to be more tiring than most and I was still only partially through installing one wall.