For everyone who has been following this series of posts on my building of the activity come playground set I’m glad to say that I’ve started to get some traction into the build. I’ve continued with the Fort Swing Set wall after last weekends mishap, the progress went forward with no new mind lapses and the spacing of 3 1/4 inches worked out well with the overall width. I made sure that I lined up the bottom edge of the slats with the bottom edge of the cross member which ensured that the top edges of the slats stayed consistent in height. To keep them in place I clamped each slat with quick release clamps that I got from Harbor Freight, again they were very cheap at $1.99 each but the quality just wasn’t there. If you applied too much pressure to clamp the wood in place you just stripped the plastic from the side that retained the trigger, rendering the clamp useless. So I guess, not everything cheap will get you by, if the plastic had been a harder type rather than the ABS that they were made from then they would have held up to the job.

Now that I’ve got over that hurdle, I’ve made sure just to apply enough pressure to hold the part in place then use a framing square to check that they were square to the deck before drilling. I had a set up of three corded drills from a triple socket extension cord, this allowed me to arm each drill with the drill bit, countersink and the screw bit. You may be asking if it would be simplier to have cordless drills instead but the cost of the corded drills from Harbor Freight worked out at $13.00 a piece at sale price. Even at full price they’re under $20.00, so even if they just survived this one project, it’s cheaper than buying one cordless drill. There’s no concern about batteries running flat and consistent torque with the corded drill gives good results every time.

You are probably thinking why doesn’t he get some quality tools instead of the cheap stuff but what you have to realize is I have plenty of quality tools but as a one off. In this instance to save time I need multiples such as the drill guns but I must admit the quick release clamps were a mistake. 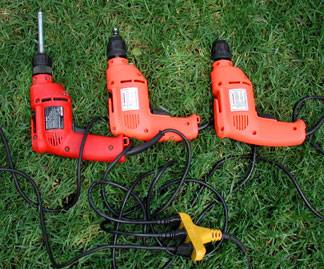 What I have in the image is a Craftsman drill on the left with two Harbor freight drills on the right, nearly the same in every way. So far I’ve had no problems with them, the variable speed works very well and there’s no slippage from the keyless chuck.

With the wall complete I decided to erect the Swing Set beam purely so the children could play, afterall it’s been several weeks without the old swing set and they are getting REALLY eager to try it out. 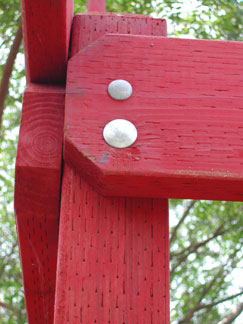 During the drilling process on all the parts I was wondering why certain sections would have the bolt holes offset. I could understand the reason for the main uprights because of the cross members coming together but why offset the cross member holes themself. This was the answer I was looking for, they are off set in the event that should you want to add extra features to your Jungle fort at a later date. It was easy to mark out the location and drill through and then counterbore for the washer, lock washer and nut.

The difference in the bolt size meant the counterbore would be upgraded from the 1 1/8 inch used on the Jungle Fort to 1 1/2 inch on the Swing Set, certainly a larger upgrade.

With the cross member strengthened I could mark out for the bolts that would fix the Swing Set supports to the Jungle Fort. In this instance there can be a difference in gap where the main beam slips between the supports. The reason for this being, if a single piece 6 inch x 4 inch lumber is used or two pieces of 6 inch x 2 inch are used, the loss in thickness due to preparation will give different overall thicknesses. The width difference would be 1/2 inch, in my case I was going with a single beam so I used an off cut from the 4 inch x 4 inch lumber that I had, to space the two supports correctly. Not only does it give a snug fit but it also eliminates any extra stress on the bolting areas due to poor fitting. 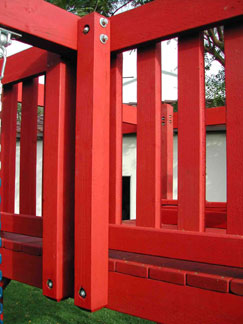 With the supports attached to the Jungle Fort side I could continue constructing the “A Frame” that would support the main swing beam. This was an easy process because all the preliminary work had been done, it was a simple case of bolting each of the parts together following the installation instructions.

During this part of the process I found that the bolts would appear to be too short so it was important to hammer the carriage bolt head into the beam to get as much thread as possible to attach to, even so I had to add an additional counterbore to the “A Frame.” As you can see from the image there is minimal thread showing beyond the timber line even after everything had been tightened.

The upper support of the “A frame” has to be horizontal to take the main swing beam. I found that I had to tighten the bolts just enough so that I could maneuver the parts to get the correct dimension. The main spread of the legs ended up close to the 9 foot dimension as suggested in the plans with the cross brace adjusted horizontal as well. I had to use my six foot step ladder to prop the “A Frame” up and this barely took the weight but it was enough to check for level. Once I was happy with this part of the Swing Set the next trick was how would I place the twelve foot beam into place. 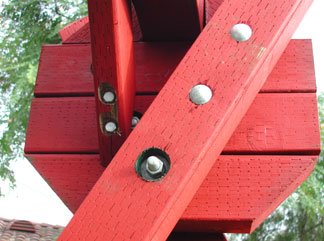 The first thing to remember is it’s not a method I would endorse, two people are always better than one so as you can imagine my safety senses were heightened to the extreme ready to jump aside at the first moment of anything going wrong. I first placed the step ladder closer to the Jungle Fort and positioned it so that the mid cross beam of the “A Frame” leaned against the back of the step ladder leaving the steps clear so I could still walk up. I then placed the two 11 inch carriage bolts into the holes of the supports on the Jungle Fort ready for pushing them into the swing beam. I didn’t want to be trying to find them once I had the beam placed into position and I also had to make sure that I didn’t knock them out with too much vibration.

Lifting the beam onto the Jungle Fort was easy enough, then climbing up the steps with the beam on my shoulder needed a little extra care as I also had to stabilize the “A Frame” as well. Once the beam was placed on top it provided a lot of extra stability which was quite surprising but a big relief. The next stage was to pull the beam across the top of the Jungle Fort and against the “A Frame” until it was very close to the edge of the Jungle Fort side ready to slip between the supports. I decided I wouldn’t move the ladder supporting the “A Frame” as the swing beam had not been secured and braced yet. I had no option but to clamber up the side of the fort on to the fort platform, once there I could ease the swing beam out over the edge very carefully and between the supports. With the swing beam in position I could then push the carriage bolts at least some of the way into the beam and finalize with a large hammer to set them in firm, with washer, spring washer and nut slipped on the end to disperse any fear of it slipping down. 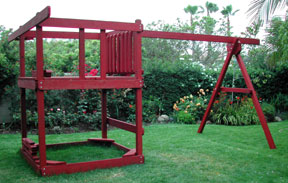 The corner blocks for the swing beam had already been pre-drilled on the drill press for the lag bolts so I clamped them into position before drilling the pilot holes into the swing beam. I also at this time counterbored the block so the head would sink below the surface. To ease the binding of the bolts during tightening I gave them a dip into heavy grease, petroleum jelly will do the same job, it just eases the amount of effort needed to wind them into position. 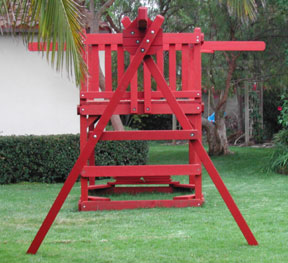 The last pieces to install on the “A Frame” were the extra bracing, these 45 degree brace pieces were installed on each side of the swing beam using three lag bolts per brace. Each one had to be individually drilled so that the holes would miss the bolts already installed during the “A Frame” construction. Positioning of the brace holes also had to be in the meat of the wood rather than a joint from the previous construction. The lag bolt connecting the brace to the swing beam proved to be no problem but the two connecting to the “A Frame” were in very close proximity of each other but seemed to hold firm once bolted in. I’m sure it will be fine but I will keep checking just incase the wood cracks in time and needs to be replaced.

I feel a sense of achievement as it finally starts to take shape and I know the next step is to actually place the swing hangers and swings in place.