The previous post saw me constructing the “A Frame” and placing the main swing beam into position and whilst finalizing the swing beam and “A Frame” it did give the swing set a whole new dimension but there is still plenty to do, needless to say I felt that the momentum was back. With the Jungle Fort I had to install extra bracing to compensate for the swing momentum so that would mean an additional four braces installed underneath the decking to reduce lateral sway. I had already cut these items to a set length during the big “cut to size” weekend and now I had to modify the length because of the floor beam interference. I decided to cut the corner off of the brace where it fouled up on the joist hangers which meant cutting off a slice of about 3/4 of an inch.

Each brace was individually marked for position, while the lag bolts, clearance hole and counterbore were drilled on the drill press. The only exception was counterboring the hole that is placed on the edge face of the brace. This will be done in-situ once the lag bolts have secured the brace to the cross member first. 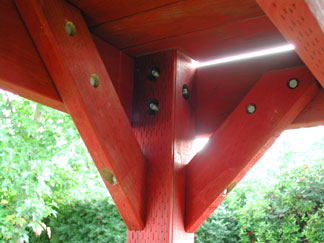 To keep a common look to the fort I made sure to line the bottom edge of the brace to correspond with the height of the bottom edge of the outer brace, then I proceeded to pilot drill and bolt the brace to the cross member with 2 1/2 inch x 3/8 inch lag bolts. Once I had the brace secured to the cross member I found that the twist in the timber would either make the opposite end bend into the fort or bend out beyond the upright. I wanted the brace to remain flush to the 4 inch by 4 inch upright.

To correct this I either pulled the brace flush with a clamp and secured with a decking screw before locking it down tight with the lag bolt. If the brace was sprung inboard I would use a G-clamp placed on the outside of the upright and use this as a means to pull the brace into position with a second clamp, then again securing with a deck screw. Once in the correct position I could counterbore the hole to accept the lag bolt and ratchet down until tight, making sure that the head was sunk beneath surface.

I was now fully satisfied that the bracing would eliminate any twist associated with the swings being in full flight so I had to anchor the legs of the “A Frame” in the same manner as the Jungle Fort with the screw in type anchors with straps and lag bolts.

The fun part now is to install the swing hardware, providing all my dimensions are correct it shouldn’t prove to be much of a problem. I was going to have a three swing location so I started off by measuring the 15 inches from the Jungle Fort cross member to give the center of the first swing anchor. From there it was 16 inches between centers with a 12 inch spacing to the next set of swing anchors. When all is done there should be a 12 inch clearance space from the inboard “A Frame” leg, OK I ended up with 12 1/4 inches, good enough I would say. If I was going with the regular swing hangers it would have been a simple case of drilling through on the swing hanger centers, threading the hanger through, add washer and secure with the nut. In my case I had upgraded to the ductile iron hangers which meant I would have to measure 1 3/4 inches either side of the center of swing hanger to drill for the lag bolt location. Each hanger would then be secured by two 5 x 3/8 inch lag bolts. 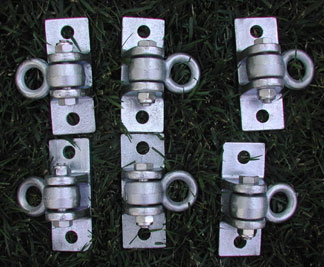 This process has to be conducted six times for the three swings that I have but I haven’t included the trapeze swing that will fit to the outside of the swing beam yet. My main aim is to have the first three swings functional first. 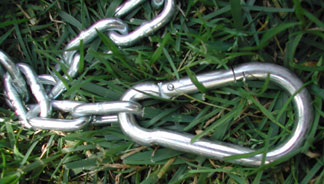 With the swings that we purchased I was very happy with the quality of the quick release clasps, chain and seats. The clasps were large 3 inches in length and I’m sure rated to 250 pounds each so I had no worries about them failing during the course of use. The chain was also heavy duty with a coating of plastic in the main grip area. The color corresponded to the seat color so it was easy to recognize each swing especially as each child had their own personal color. 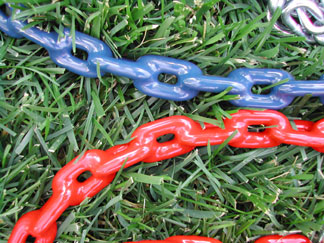 The upper section of the chain was loose so that you could adjust the chain length from the swing hanger, this allows for adjustment as my children grow. Our previous set had coating all the way to the top of the chain which left no room for adjustment unless you peeled the coating off to reveal the links. For the three swings that I have I’ve adjusted the chain length to suit each child on their own personal swing and made the third midway, that way both could use the third be it a little on the tall side for our smallest and a little on the short side for our largest. It’s a compromise but it seemed to work out. 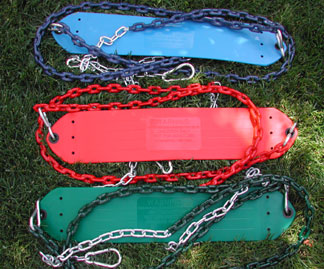 With each of the chain lengths adjusted I could place each seat now onto the hangers and to say the children were excited would be an under statement. I had to remove them a couple of times just to readjust the lengths but this was a simple task. I was very interested to see if there would be any movement in the Jungle Fort or the “A Frame” once the swings were in motion especially after the experiencing the last swing set. I must say much to my delight that the frame work stayed firm with zero movement and the swings were at maximum height.

Now that I’ve reached a stage where my children can now swing I can continue with installing the Jungle Fort walls and move on to the ramp and slide. 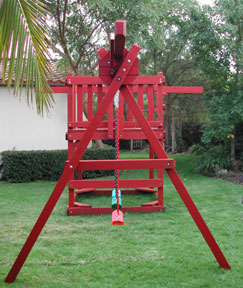 2 thoughts on “Installing the Swings plus Lateral Bracing”