The success of erecting the swing beam with swings and hardware paid dividends during the week while I was at work. My children had plenty of playtime testing out the new swings with my young daughter pleading to her brother to push her on her swing, gone was the baby swing as she was a “big girl now.” No mention had been made of putting up the previous baby swing as her new “blue” colored swing gave her the additional thrill of being able to go higher, meanwhile you could hear the cries from her mother, “not too high” ringing from the house.

The task for the weekend was to progress the safety of the decking by erecting the walls. Even though there would be numerous openings for the Monkey Bars, Rock Wall, Slide and Ramp, the remaining openings would have to be filled. The most difficult aspect was to reconfigure the upright supports that would provide support for the cross members. The back wall would be split between a high and a low Rock Wall, I would have to start there with a cross member first. The cross member would span across the back face with a gap of 14 inches between the decking and the bottom of the rail allowing enough room to crawl in from the lower Rock Wall with a hand grip providing additional safety. This part had already been cut, predrilled and coated with redwood stain making it an easy installation. I had also cut enough upright rails that would span the whole back face but as I had decided to do a split level Rock Wall I would also need to install a fixed upright at the center point of the decking to support the boards that would make up the higher Rock Wall.

My first task was to mark the midway point on the decking and from that centerline, mark either side for the width of board I would use. As I was using a 2 inch by 4 inch board the slot would end up 1 1/2 inches by 3 1/2 inches due to the finished nature of the wood. The overall length would be enough so that it would pass through the decking and fix to the inside face of the cross member that supports the joist bracing. This upright support would have a chamfer on the bottom face and the upper edge would be square so as to match in with the roof supports.

With the position marked out for the additional upright a 3/8 inch hole drilled in each corner helped to prevent binding on the jigsaw while removing the waste material. This was an easy task as the one face was open because of a previous mishap while installing the decking. With the additional cutout I could now slide the board through this hole and position it square to the decking while keeping it below the roof support position. Once I was happy with the setup I could clamp tight and use my three drill gun setup to fix the upright in place. Now that this additional step had been done I only needed to install half the allocated pieces for the fence as the higher Rock Wall would blank in the rest. The fact that the cross member was lifted to allow for an entrance for the lower Rock Wall would provide a small safety barrier until the higher Rock Wall was installed. 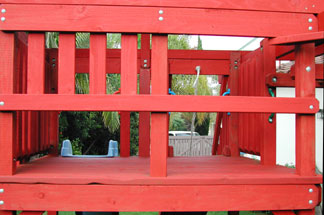 To complete this one task took some time even though it was an easy fix, the trouble was deciding on the overall layout that we would use for the Rock Wall. Both our children like to climb but having just a low Rock Wall would have been too small for our eldest son but the large Rock Wall would have been too much for our youngest daughter even though I’m sure she would have made it to the top. With having the two variants it satisfies both until they both can climb the larger Rock Wall. With that issue now under my belt I could move forward and deal with the wall on the Monkey Bar side. 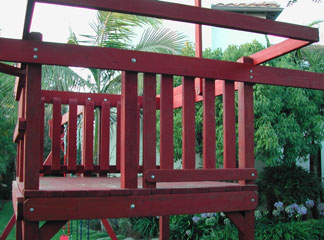 On the left side of the Jungle Fort I had decided to place the Monkey Bars which was a 180 degree change from the original plans. During the “cut to size” weekend I had left out all cut outs for extra activities until I reached that part of the configuration so that I would have less holes to fill-in in the event that I should make any mistakes.

Knowing that, I had to now remove from the decking a section that would allow one of the main upright supports for the Monkey Bars to pass through plus a support for the fencing that encloses the rest of the side. The Monkey Bar support was made up of a large 4 inch by 4 inch timber and the off-set from the corner post was 21 inches. Once the position was marked out on the decking I could drill each corner so that the jigsaw would easily maneuver and remove the unwanted material. With the slot now in the floor I had to mark out the bolting positions on each of the cross members of the Jungle Fort and drill the clearance hole through.

The next task before I bolted in the Monkey Bar support was to provide a support for the rest of the safety wall that would fill in the remaining distance to the Ramp entrance. I had enough room for four slats and the main upright support and to try and keep it similar to the opposite side I went with a 3 inch spacing. This ended up leaving a 1 1/4 inch gap between the Monkey Bar support and the main support for the safety wall, likewise a 1 1/4 inch gap between the main support and the first slat. With that all worked out I cut in the additional slot for the wall upright. I fixed in the wall support first using three deck screws then continued on and fixed the Monkey Bars support with 5 inch by 1/2 inch carriage bolts.

With both the structural parts in place I could reduce the original cross member that had been cut for that side to suit the new configuration and redrill to accommodate the carriage bolts. Additional clearance holes had to be marked onto the corner Jungle Fort upright and the main wall support. I used the same clearance to the decking as used on the swing side to give a common look. Now that I had redrilled and counterbored those parts in the appropriate places I could place the lower rail in position and bolt down secure.

The remaining four slats to fill in the open wall were positioned individually, making sure to line up the bottom edge of the slat with the cross member first then checking for square with the framing square before clamping into position. Once set, the three drill combo completed the fitting. The same procedure completed the fill in of the Monkey Bar side leaving just the front of the Jungle Fort to fill, between the slide and the ramp. 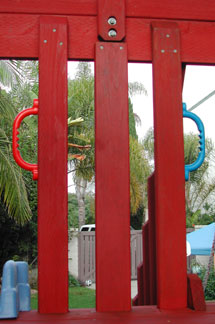 For our configuration we decided to have the slide and the ramp on the front of the Jungle Fort. The plans made recommendations for safety reasons that you should have a minimum of 21 inches between a configuration such as this. When I actually marked out for the additional uprights I ended up with a clearance of 19 1/2 inches between the slide and the ramp. I felt that it would be sufficient even though it was 1 1/2 inches shy of the recommended number. I didn’t have much option for a redesign and if I had fully understood at the onset of the build I may have increased the front overall width be 3 inches to guarantee the clearance but now I’m here I don’t think it will be a problem.

On the opposite side to the ramp, a dimension of 22 1/4 inches was marked from the inside of the upright onto the decking. This is the minimum dimension needed for placing the slide into position. This upright would be a 2 inch by 4 inch prepared timber meaning I had to cut out a slot 1 1/2 inches by 3 1/2 inches to fit it in. The left over dimension between the two uprights was 10 1/2 inches and by allowing a gap of 3 1/4 inches per side the central upright would have to be a custom piece of 4 inches, fortunately I had plenty of six inch boards that could be cut down to accommodate the new dimension. Once again cutting in these extra slots was easier due to the earlier mishap leaving an open face to start the cut from but I will have to place in the filler piece before placing the ramp or slide into position.

While cutting in these additional slots I noticed that they would fall in line with the joist hangers underneath so I had to make sure to allow enough play for the board to push past but even so I still had to provide a groove in the surface where the joist nails protruded. I didn’t want to have a large gap in the upper decking so it was easy enough to carve the slots with my wood gouge. The center upright has a slightly different problem, this would straddle one of the joist members which meant the upright had to be slotted to slip over the joist. With the center upright the top was left square so as to match up with the roof construction, for the others, 45 degree chamfers helped to reduce the sharp edges. 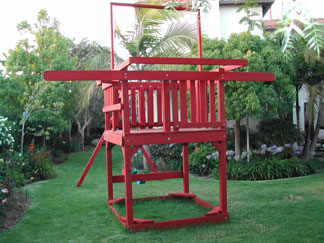 With all the decking enclosed in the areas needed, apart from where the Rock Wall sits which will be enclosed by the wall itself, I could concentrate with assembling the frame for the roof. For this there were only seven pieces to the puzzle, two parts that would span the front and rear part of the Jungle Fort, being fixed to the main corner uprights with 2 1/2 inch deck screws. A further two parts that would be screwed to the ends of these front and rear pieces creating a rectangle that sits on top of the front and rear top boards of the Jungle Fort. This is the outer frame work that will fix the roof tarp in place.

The apex of the roof frame is made from three pieces, using galvanized metal corner brackets to hold the parts together. These were easily fixed in with galvanize joist hanger nails. It was important to make sure the counterbored holes that would accept the bolts were on the inside before fixing on the plates, I had a close shave with one being reversed, luckily I caught it before nailing the plate fully in. The one thing with this method is it becomes a very wobbily fixture until it’s secured in place. Trying to man handle the part into position proved to be quite a task, I found that once on top of the central support I could lift it until I could push the bolt through the hole and clamp into position. I did exactly the same for both front and rear until the bottom edge lined up with the pre marked height, once there I could check for square with the framing square before securing completely with the 3 inch by 3/8 inch carriage bolts, washer and lock washers.

I decided to install the actual roof canvas at a later stage, right now I had to think about constructing the ramp and installing the slide. Once I have these items install then I would add the Monkey Bars then install the roof canvas. I didn’t want to hinder my progress by having to duck everytime I was standing on the deck. The progress is slow but its getting there and with a bit of luck the following weekend will see the ramp and slide in place.