It seems such a short time ago that we had to euthanize our pet Newfoundland after nearly 12 years of loyalty. He had been suffering with limited mobility for some time until he slipped on the tiled floor making him virtually paralyzed. Even though he regained a little mobility the majority of the time was spent aiding him with the help of a harness.

That was nearly twenty months ago, he was a Landseer, a black and white version of the traditionally black colored Newfoundland. We at that time still had his older half brother and his health was just as poor but already stricken with grief we toughed it out knowing the inevitable for him was only months away. That time came when he had continual bleeding from the mouth with it being diagnosed as cancer of the jaw, at 13 years and 1 month his ability to withstand any treatment was out of the question. His mobility was already restricted, appetite was none existent and he had to be helped with any normal functions by using a harness. Our once majestic animals had succumbed to old age and both had died within six weeks of each other leaving our household unusually dog free. That was a hard first three months of 2006 and only now can I start to talk about it and still not in much detail because of the feelings that I have. Call it soft but that’s how it is when you have animals that are part of your family.

Since that time we have only briefly spoken on how we would research our next dog, we knew that it would be a Newfoundland, a Landseer but the question was when. It was always going to be next year, we would start looking then. Our intentions were to research the various breeders who we knew breed consistent quality dogs without the inherent problem of inbreeding. Most of the kennels that we were interested in were back on the east coast and knowing that, the question would always arise on how would we view the animal without making arrangements to visit. The kennel would probably have a strict viewing policy if any at all and a lot of the times the dog is pre-selected for you on the basis of if you wanted a show dog or a pet. The standard or traits of the animal being determined by the breeder on the desires of the enquiring party.

We also had to consider another issue, would the breeder be willing to accept us as a worthy recipiant of one of their animals. Newfie people are very protective and selective on who receives one of their puppies but for us I’m sure it wouldn’t be a problem because of our previous experience with the breed.

Our previous two Newfoundlands had a large portion of Canadian genes from the Topmast kennels and being use to that look we always tend to favor any animal that has that particular kennel in their makeup. As always my wife checks the classifieds in our local paper, I’m not sure what she is looking for but very rarely is there any Newfoundland dogs for sale let alone puppies. This last Saturday, September 8th 2007 is an exception, there is a posting in the pet secton of the classifieds:

She calls to me, who is still working on the Jungle Fort for the children. “There are puppies for sale and they have photos available on the web.” “OK, I’ll check out the website of the newpaper and we’ll take a look.” Well, we get into the pet section and there are no photos posted let alone the classified ad. I think no more of it and just put it down to an error on the newspapers part. The next day, the ads still there, well of course, it’s running for a week, we’ll check again for the photos just in case, you’ll never know otherwise. This time the images are available and they are all Landseers, from what we can see from the photographs they all appear to have good features and good markings. I suggested “let’s go and take a look” but my wife protests that we are not ready, we’re not puppy proof. OK, phone up and find out more information, afterall this is really strange that someone would be selling Newfoundland pups this way. 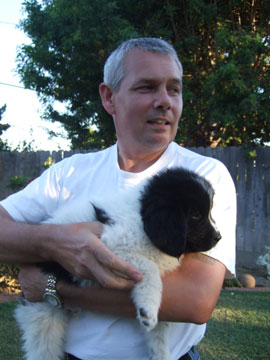 The first thing my wife did was to email asking for more information, this was about 11:30 AM and half an hour later I said just call and find out the scoop. I tend to be impatient when I’m curious and I wanted to put the issue to rest so that I could concentrate on the final parts of the Jungle Fort. I needed to know the story behind this litter being offered in the paper. The first call offered no such luck and just a message was left leaving me to continue building the Rockwall.

The next call several hours later resulted in talking to the owner of the puppies who was in town visiting her sister from Salt Lake City, Utah. She had driven from Salt Lake City with the puppies, stating there was a larger Newfoundland dog following here in Southern California than back in her neighborhood, making it easier to sell the puppies here than there. The question was asked, who are the parents and can we see some photographs. She said the parents are both Landseers, one from Montana and one from North Carolina and both being exceptionally good looking animals we decided to breed them. So what we have is a classic case of a backyard kennel, the sort of thing that all breeders of pedigree dogs urge you to stay away from because there are no guarantees of what you will get but I was at a stage where curiosity had got the upper hand, the tipping point where there is no going back, a position that everybody reaches at some stage in there life where turning and walking away is not an option.

Now knowing the basic outline, several more calls followed with additional questions asked and on the final call I said, “OK, tools are going away it’s time to go and see what there is, this phone tag will not get it done.” So armed with the directions, kids in tow, we go to see this litter of Newfoundland puppies. During the drive I’m thinking this is totally the opposite way of how we were going to research for our next dog but we’re on a path that could not be derailed and we both knew without even talking that we would decide on a dog today. Once we reached our destination there was a family gathering and I apologized for disrupting their day but they didn’t seem to mind as they showed us to the backyard.

The puppies were cordoned off in a pen for safety, once the owner let them out it was like a small version of Beethoven, as the puppies streamed onto the grass falling over each other. There were seven in total but we were informed that the litter did consist of ten but three had already been sold back in Utah. We had already decided that our next animal would be a male and as we looked at the pups there were two that immediately stood out. These two had the better markings for what we were looking for and the thickest coats with the best tails. For us this was totally different because when we purchased our last two newfies the animals were already chosen for us, we never had a choice. The one that I felt was the best of the litter was in fact a female, I knew that even though she had the best markings a female was out of the question. The next best was a male, plenty of white with a black saddle and blotches of black on the rear, a handsome dog.

While studying the rest of the litter we still kept coming back to the same two dogs even though they all appeared to be in good health, friendly and playful. When I picked him up and laid him on his back he would settle down and just look me in the eyes having complete trust and faith in my handling. His bone structure appeared to be firm with no strange lumps, his bite seemed to be correct with no pronounced over or underbite. He had a well formed head and large paws, so on first impressions he fitted just what we were looking for.

We decided to checkout the parents by online photos and both animals had good marking but appeared to look a little thin although the female your could clearly tell, she had just had a litter. The grandparents we were informed were both champions and OFA clear although the parents of the puppies had not had any checks to confirm their standing. Weighing up the pros and cons we decided to go for the little guy even though all the health checks that the breeders recommend for a large breed had not been fully completed, a pure gut instinct told us to do it. The payment would be by cashiers check which left us an overnight cooling off period should we decide not to proceed and to be honest a sleepless night at that.

Bringing him home was a joy for my wife and daughter, my son was at school and he would be greeted by his puppy, his job was to name him, our job was to see how he would go through the night!