What an eventful week, little did we know that we would have a new puppy this time last week but now he has settled in, it’s as though we have had him forever. That first day, Monday after my wife collected him, resulted in an instant phone call enroute to our home. In the background I could hear the telltale sign of a puppy who is unclear as to what has just happened, that crying from a small puppy who is in the traveling crate at the back of the truck, on its way to our home. That small puppy weighs 12.5 pounds, not bad for a 7 week and 3 day old pup.

These dogs are known to grow to 160 pounds and over so it’s important that the growth is controlled to prevent any growth related problems. We had already decided to take him to a vet that had been recommended by Karrie Cook, one of the members of the Newfoundland Club of Southern California who we are members of and have been for the last twelve years. We have always had that unsatisfactory feeling with our previous vets who we felt had very little experience with big dogs so it was quite refreshing to get some kind of recommendation. I guess it’s just the generalization of all animals and no specific expertise on one that we were looking for. We wanted someone who was passionate about the dogs that we like and according to Karrie he deals with a lot of Newfs, especially rescued Newfs. The appointment has been set up for our visit to the Arbor Animal Hospital in Irvine so it will be interesting to see the difference in service. 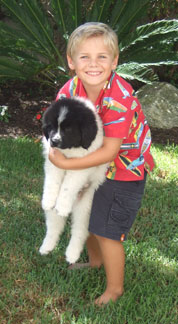 With the puppy now at home I would have to set up a perimeter fence, to at least keep him safe until he gets more familiar with his surroundings and the garden has been checked over for puppy proofing. We already have caging that could be clamped together to form a pen from our previous Newfies so that was no major concern, we also had a ground sheet that could be clamped over a portion of the pen to provide shade when the sun lands on that part of the garden. We knew this would be used during the first few weeks, especially during the potty training stage and it would provide a means of keeping him secure while house keeping was in progress.

It’s funny how those items that we had for our previous dogs still remained in the garage, normally we would discard all these items because of the sadness associated with them but I guess we always knew we would get another animal sooner rather than later.

That first evening we set the task of naming our new addition, I had already done some research and wanted to have a name that would relate to the kind of work associated with the breed. They are renown for draft work and water rescue so in my mind any name with sea or water would fit the bill. My son had a stuffed toy with the Landseer markings and that had been named “Murphy” by my wife, to my surprise the origins for that name were Gaelic and the meaning was sea warrior, I needed to have a few alternative names as this one would be a serious contender.


In thinking of the name it should also be suitable so that the children could pronounce it and nothing too complicated. The other names that came to mind were Marmaduke, a Celtic name meaning leader of the seas and Murdock, a Scottish name meaning victorious at sea.

To start off with we asked the children what they wanted to call him and my daughter instantly replies “Puppy!” and Jackson replies, “He is a puppy, we can’t call him puppy!” So after several minutes I offer the three proposals that I had come up with, Murphy, Marmaduke and Murdock. Well once I mentioned Murphy the children went wild, ” Yeah, yeah, Murphy, yeah,” as they’re jumping up and down with their arms in the air. Well, my wife and I looked at each other and said “Well, I guess that’s it then.” Normally there would be a lot of deliberating over the name but in this instance it was decided in under ten minute and the thing is, it totally suits him.

With his new given name I wanted to register him with the AKC so that we could get his pedigree papers, this would give us his lineage and right now we only new who his parents were. We decided to register him as Murphy Warrior of the Sea and this was quite fitting as he has lost no time in scooping out the water from his water bowl.

The excitement of the day had left everyone pretty drained, Murphy had been so far raised on Pedigree puppy food dry and canned. We would change him over to the brand of food that we had used for our previous dogs who lived to a ripe old age. A diet of Wellness puppy and canned food until such time we would transfer him to Wellness regular dog food, this will all be determined by the advice given by the vet. The one thing with Wellness is it’s all natural without any by products and is one of the foods that hasn’t been tainted by pet food recalls.

That evening we decided to take the traveling crate up to the bedroom to house Murphy during his first night at our home. While in the house that day, he had had only three accidents in the cordoned off area of the house so we were hoping he would be able to hold his bladder during the night. This was an unlightly scenario but we were hoping for the best, we knew from our previous experience that no two animals react the same during their first night in a different surrounding. With Murphy it was just like a baby he would start to yap letting us know he needed to go outside and just like a baby it was every three hours which was totally amazing, not one accident.

Even though the night was pretty sleepless for us he never wet in the crate, taking him out as he indicated his needs has resulted in zero accidents since that initial day. He has walked to the door and tapped on the wooden blinds so that he can go out but it is way too early to let him roam the whole house. This little guy with the name of “Murphy” has now become part of our family.

Murphy, welcome to our home!