With the dividends of the picnic bench being enjoyed, now was the time to partly enclose the space with the rock wall. This rock wall would enclose the back face of the Jungle Fort and also provide a wind break. Our property is fortunate to be only one and a half miles from the ocean and at around eleven o’clock each day the wind picks up and there is a steady breeze. This is a great relief during the summer months but as the season changes and the winter months approach it can get a little chilly so this rock wall will provide a welcome refuge for my children when they sit at the picnic bench.

I had decided to split the vertical rock wall so that it had a high section and a lower section, by doing this it would satisfy both my childrens skill levels and also provide an easy access to the back of the fort platform. The plans had provided both a vertical wall and a sloped climbing wall but as our space was just with six feet of clearance from the vertical wall, an angled alterative was out of the question. 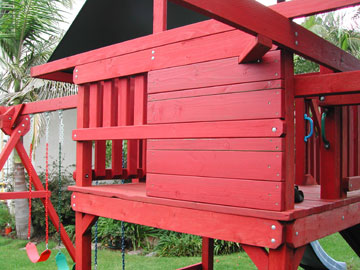 The first place that I decided to board in was the still partially open face of the rear platform wall. I would fill in the gaps between the cross member and the vertical post that supports the slats for the opening of the lower climbing wall. I started off by fixing two boards to the vertical supports with two and a half inch drywall screws flush with the decking. This would leave me with a small custom width section that I would split on my table saw to bring the wall up to the first cross member.

Next I placed a full board on top of the first cross member, again fixing with drywall screws. The second full board had to be placed at the top of the structure rather than on top of the former board because I would have a custom width piece to fill the resulting gap. This custom width piece could not be placed at the top as I had a brace in place to eliminate any lateral flex and the width of the custom piece did not support being trimmed around the brace. If I placed the full board against the upper cross member I could custom cut around the brace and still ensure integrity of the board. The small gap then being filled with a custom piece.

With the upper part of the climbing wall complete it also filled in the one remaining opening to the Jungle Fort deck. Any openings now were purposeful, supporting the slide, climbing wall, monkey bars and ramp.

The opening for the small climbing wall stood at just over fourteen inches, sufficient room for both children to pull themselves onto the decking but also safe enough where they would not accidently fall out if they were to step backwards. 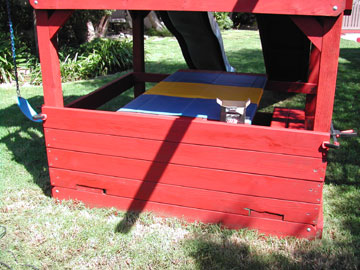 With the upper section of the rock wall complete I could fill in the lower section with full width boards. The first board would have to be a custom fit around the corner seats that had been left in place. Even though I had opted for the picnic bench, making these seats obsolete, they still provide a solution for keeping the framework rigid at the base level and cover the protruding heads of the anchoring system.

The bottom board was placed over the corner seat positions aligning with the outside of the Jungle Fort, clamping the board firmly I could mark each seat position by scribing with a pencil along the seat and tranferring the shape to the board. Simply square the lines down with a combination square and scribe the thickness of the board with a marking gauge giving the overall outline of the material to be removed. I then opted to cut the angled line with a hand saw then knock out the material with a large chisel and mallet. This was a rather crude method but it was quick and easy to remove the waste without elaborate table saw set-ups even though it wasn’t the cleanest solution. The raw face then being recoated with preserve to ensure that any wood eating insects would not get a free lunch. 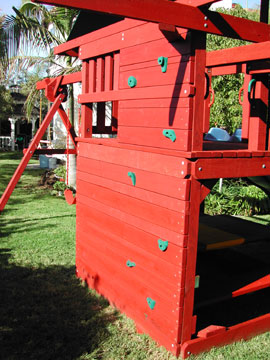 The remainder of the boards were clamped into position and drywall screwed down using my three drill gun setup. I was able to use several four inch width pieces rather than all six inch boards and this helped to fill the remaining gap exactly with only a small amount of hand planing needed to ease them into place.

With the rock wall now totally boarded in I also noticed that it also provided a welcome shade spot from the afternoon sun during the summer so not only did it provide a wind break but also a sun shade!

The next step was to fathom out the spacings for the actual rocks themselves and this I would need the help of my son. I would have to hold him while he would show me where he would need the rocks installed.

I had purchased two sets of the rocks, one set green and one set red with each set consisting of ten rocks of various shapes and thicknesses. The thin rocks would be used as the stepping stones with the thicker ones being used as they progressively went higher on the climbing wall, this would give better grip and safety as the children climbed higher. I had spaced out the first rocks so that it was a stretch then the intension was to fill in the spaces with any remaining rocks to give alternative ways to climb. 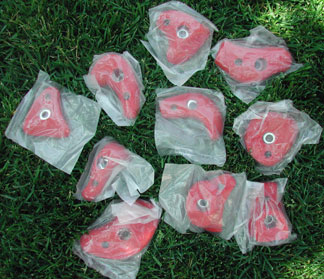 When I was placing the order for all the hardware, the climbing rocks came in two formats. There was the cast resin type that we eventually purchased which had a pumice stone finish and more resembled a true rock and gave a natural grip and a plastic type rock.

I decided on the resin rock with the pumice stone finish because I felt that the plastic type would always tend to be slippery, I didn’t want the children climbing with wet shoes and slidding off creating a potentially dangerous situation. I haven’t seen the plastic type rocks so I can’t really say for sure but I’m just going on my own gut feeling, most plastics that I have dealt with always have a self lubricating property as such even if there are ridges placed in the overall design. Also if the plastic gets scarred during the course of play there can be some nasty burrs left behind that could cut anyone brushing against it so I would rather be over cautious and have a clear conscience. The one thing that would have been better for the plastic rock is that they were oversize making it easier for smaller children to grasp and climb.

Eventually when the hardware arrived I was convinced I had made the right choice, the rocks had a texture exactly like a pumice stone what they call in the catalog, composite/sand rock holds, that would provide plenty of grip and as my son enjoys climbing bare foot it should work out very well. The rocks all had provision for two fixings, a large 3/8 inch by 1 1/2 inch lag bolt and a smaller 1 1/2 inch washer head slotted sheet metal screw that could be driven in with a nut drive, screw driver or socket set. 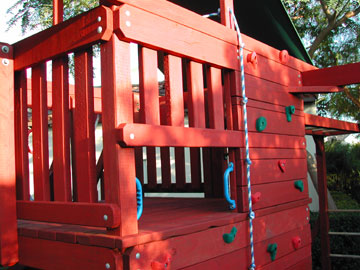 Setting the composite rocks entailed loading the drill guns with the correct pilot hole drill for each of the lag bolts. I had to try not to drill completely through the board, although on several occasions I had no such luck.

It wasn’t a problem but I didn’t want it to look like I had large woodworm on the backside of the climbing wall. The first fix was to secure the rock with the smallest lag screw purely because it was the easiest to ratchet in. The ratchet would drive the bolt up to the face of the rock where a large screwdriver would take it the rest of the way until completely submerged below the surface, leaving no chance of metal becoming a potential hazard. Once secured the large lag could be bolted in place and this could be driven all the way with the ratchet. I had manage to use all twenty rock holds and probably could have used a couple of extra but the areas that were critical were all well covered and if I have to I can always purchase extra at a later date. 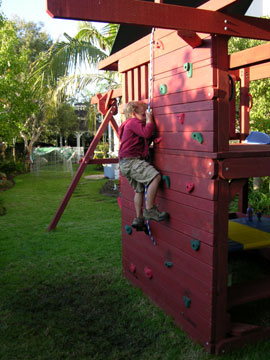 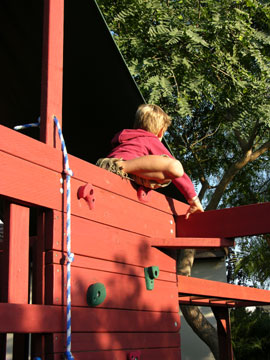 Watching my son climb the initial wall was a little scary for me but he was very competent in his approach but at that point I had decided to add an extra climbing rope incase of any mishap. This would at least offer some chance to correct any slip and possibly avoid any bad falls.

I had purchased additional 3/4 inch nylon rope from Home Depot and decided to fix it centrally to the rock wall so that it could be used for both the low and high wall. The first hole for the rope was placed at about two feet from the base but so that it was below the top of the picnic table. I didn’t want to be tying the knot above the table face and have an eyesore. The second hole for the rope was placed on the central vertical for the roof at six inches above the horizontal crossmember. Each hole was drill with a 3/4 inch spade bit, making it easy to insert the rope, then the edges of the hole were sanded to reduce the amount of fraying from possible rubbing. When the rope is in use it will have to be regularly inspected to ensure that there is no wear that could lead to possible failure at a later date. 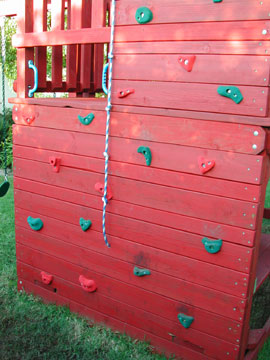 The rope was placed through the bottom hole and a double knot tied as there would be a certain amount of stretch when everything was pulled tight. From then on up until the top hole, knots were tied every twelve inches to provide a good grip. Once the rope was threaded through the top hole a knot was put in place as close to the hole as possible then a second knot added. I then made sure to pull the rope as tight as I could and work the double knot as close to the hole as possible, this provided a very taut line and even when my son was climbing the rope it did not flex more than a couple of inches. This may stretch a little more as it gets used and additional weight is placed on it but by shifting the knot it can be made snug again.

The completed structure is now in operation and only a few finishing touches need to be made, a few handles, the roof tarp fixed firmly and a little touch up with the redwood stain. I might add the rope ladder and disc swing but for now all is good and my family is having a blast!