This last Christmas, one of the presents my young children received from their uncle was a starter kit for fishing and being the type of person that he is he let them open it early. Now this wasn’t planned but as they were going fishing to the Irvine lake what better time to christen the gear. Jackson, my son had a “Spiderman rod and reel combo” at four feet six inches long and his sister Madeline had a “Barbie rod and reel combo,” all of two feet six inches!

I had been fishing at the lake maybe once before with not as much as a bite but hey, maybe they will have some fun and it’s out in the open with plenty of fresh air. The children’s lake where they would be fishing had been restocked for a special “tagged Fish” event that would span over the entire Christmas period from December 15th through January 6th with the opportunity to win prizes for each tagged fish that were caught. This would result in each tag being exchanged for a spin of the “prize wheel” and the prize being determined by where the pointer stopped, in addition the child’s name would be placed in the draw for the grand prize which was an Xbox 360. These prizes ranged from a free days fishing to fishing lures and the grand prize draw set for January 6th at 2 p.m. 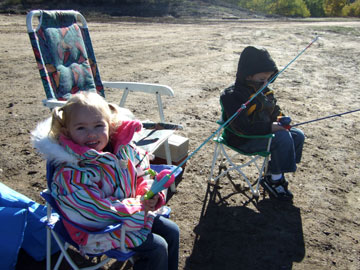 I didn’t think much more about the fishing as I was at work and the rest of the family were at Irvine lake on Friday 21st December, my last day before the break. I kept getting intermittent calls on how many fish they were catching and to cap it all the Barbie pole was really making out! 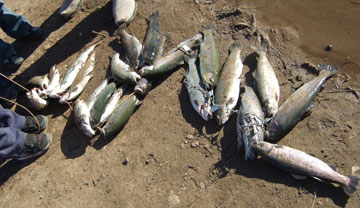 Jackson was the first to actually strike on a fish and to his surprise it was a healthy sixteen inch rainbow trout with one of the tags behind its dorsal fin. This was the first fish that he has ever caught and from that moment he was totally obsorbed by the process, mastering the casting was something that is going to take time but nevertheless it’s alway a good sign to have a successful first outing.

The total amount of fish caught by the group came to twenty with three of the fish having tags, this was quite fortunate as there were three children altogether. This allowed three spins of the wheel with each of them guaranteed a prize. For my two children they came away with a free days fishing but this amounts to two free days for Jackson as Madeline fishes free because of her age. The cost of this fishing trip was $20.00 per adult and $9.00 per child 4-12 years of age and the beauty of this is, you don’t require a licence with the lake being privately owned.

Every fish that was caught was big enough to eat and with the quota being reached everyone left in high spirits with the cooler filled with that nights supper. 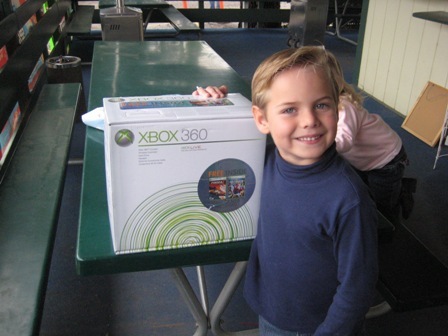 I was keen to leave work that evening, to see what they had brought home and to hear the stories of the day. I was to clean fish but it had been decided to do it the next day but with them being on ice that was not going to be a problem, they would keep until the morning.

No mention had been made about the grand prize draw in the New Year, there had already been a great result and I felt eager enough to want to return during the break to see if I had any luck. We had paid no more attention to the grand prize with so many people in the draw, what would the chances be to come out a winner?

It was during the Christmas break that we were able to go fishing as a whole family and with great success, another tagged fish and an eighteen inch fish being the biggest. A totally enjoyable day that spanned from ten in the morning to four in the afternoon with a total of six fish being caught. All in all a very enjoyable break leaving me well rested to start the New Year.

The first week back at work was slow as people dusted off the remnants of the holiday bringing us quickly back to the weekend again. It would be this weekend on Sunday that the draw would take place but we had totally forgotten about it. Sunday afternoon comes around and I’m working on the computer as the telephone rings, my wife answers and is a little wary of who it is on the other end as she does not recognize the voice. I remember her saying “Excuse me, who is it?” then her exclaiming “You’ve gotta be joking” and shouting out to Jackson “You’ve won the grand prize , the Xbox!” His first reaction was to start screaming “Hooraaay, Hooraaay” then can we go get it. Much to his disappointment this was not possible until the next day when they would have it at the fishing shop at the lake. 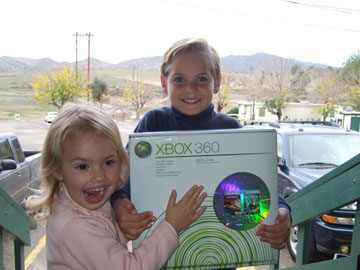 Collecting the prize on Monday was a very exciting moment for him, it had been wrapped in Christmas wrap and he was to open it for photographs for the Irvine Lake website, a great end to the Christmas holidays and yet, a question to be answered, “Will there be prizes the next time we come fishing?”