We have just started a new month, April, which is closing in on the anniversary of the start of the Jungle Fort project and as you all know it was only a couple of months ago that I actually completed the whole structure. During that period of time my children have grown to love all the activities that it has to offer, from the dressing up of the fort structure during the Christmas period with tinsel and garlands, to this Easter, with the hiding of Easter eggs. 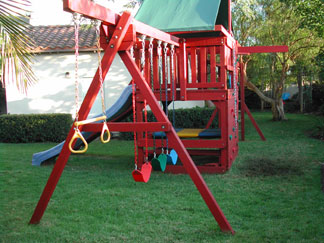 The endless options that it has to offer far outweighs the amount of time that it took for me to construct, mind you little hands had a lot to play with the construction as well.

Helping with the ratcheting of the bolts, placement of the climbing wall rocks, bringing nails and screws to the construction site, it all brings back those memories that will last a lifetime. So now that it is finished, what’s next?

With any large construction project it is important to ensure that all bolts are kept tight and during the course of the construction the timbers have shrunk and expanded with the bolts loosening up to where they need to be cinched tight again. I had noticed that the swings had been slipping when in full flight with the tell-tale signs of wear around the hangers. I remember when I had tighted these bolts up initially and how difficult it was to wind them in to the full depth, probably because of the moisture content of the timber but now that it had dried out fully it was far easier to lock up tight again. 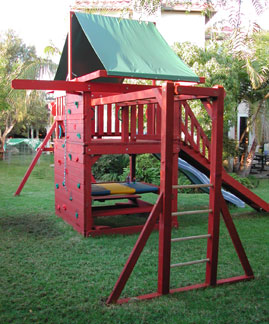 The first thing that I wanted to do was to tighten the swing hangers and this also meant greasing to eliminate any squeaks that had worked in during the period of play. All the bolts holding the main frames together would have to be checked as would the slide installation. The roof tarp had remained firm during the winter storms and all the high winds, not even popping any of the press studs which is quite impressive as the palm trees were banging against the side of the house at the height of the winds. The bolts holding the climbing wall rocks and the grab handles were all checked and the climbing rope will have to be knotted again to take up some of the slack gained through use. The picnic table cover need a quick wipe to remove dust but apart from that everything is still sturdy as a rock. 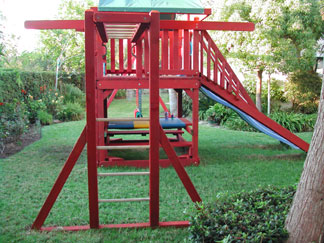 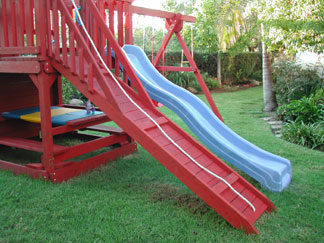 A couple of hours saw all the bolts checked and tightened, regreased hangers with swing seats and covers wiped. I had noticed a little of the redwood stain missing in some areas so I will touch up and refresh these areas. I had not coated the rungs of the monkey bars with any preserve or redwood stain but had noticed over the winter that a little mold has set in because of the dampness associated with the beach. To combat this I will have to coat with preserve and then cover with redwood stain. The redwood stain will eventually have to be rubbed down to remove the roughness so that it doesn’t tear little hands when in use.

With all this taken care of the Jungle Fort is once again ready for a full season of kid mania and that doesn’t mean just mine. Since the construction it has been a worthy competitor to the local park with school friends and pre-schoolers enjoying the construction and all in the safety of our own backyard.

So what’s next on the construction horizon, I think it’s time to make a work bench so I don’t have to keep working on the floor. The good thing is I have some timber left over so that will take care of the frame. If your interested, check back on a regular basis and see where I’m at, until then enjoy!