I’ve been contemplating a work bench of some description for a very long time but as everything goes, it always gets put aside or I just make do with the Workmate. Now I’m sure I’m not the only person who lags behind in this department, the project is always more important to get done regardless of the inconveniences at the time and of course it does get done but it could be easier.

In the past, I have always struggled to support the timber and when I’m in the process of planing any lumber I have to use the Workmate that I have. The construction of my particular model has been streamlined over the years for quick production compared to the original model that I had when I was living in England. The original was a cast aluminum frame if I remember correctly, compared to the stamped sheet metal that today offers, obviously a sign of the times with trying to turn a profit. The fixings are nylon and eventually get stripped from the worm gear from the constant tightening until the top is no longer held down, making clamping a hit and miss affair. This reduction in clamping capabilities adds more frustration to the job at hand, so now that I have a little spare lumber from the Jungle Fort project I can utilize this material for the base construction reducing the overall cost of the bench but first I have to decide what size the top will it be.

To keep the overall expense down I decided to make the top from one sheet of 3/4 inch plywood from Home Depot, the birch faced. If I made the overall length sixty inches by twenty four inches I have three laminations with the center laminate made up from the end of the sheet. I decided to cut the length of the bench off of the sheet with a Skil saw using a straight board as my fence, clamping it into position to control the cut. Support for this operation was again my rather worn Workmate plus a couple of roller supports. 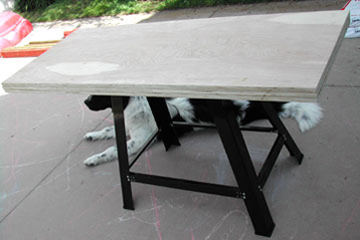 Once I had the two main lengths for the bench top cut I could split the remaining material to produce the center part of the lamination. This three part lamination would give me a sturdy two and a quarter inch thick bench top with a single glue joint for the middle section. As you can see from the photo the three pieces are laying on top of my machine stand with our faithful puppy close by just for extra support!

Now that I had the boards cut for the top I would have to glue them together but first I needed as flat a surface as possible. For this I decided to use my table saw as it had the extra wings for support and they were of the cast iron variety giving a good flat surface. Firstly I would have to remove the knife blade and fence so that I would have a completely flat surface, this was a simple operation with only a couple of bolts to remove. Next I waxed the surface of the table saw so that the glue residue would easily chip off and laid paper underneath to catch the drips of glue once clamped together.

With the set up now ready, the first board was positioned centrally to the table and all clamps opened up ready to do their job. Titebond waterproof glue was liberally applied to the surface and a notched spreader worked the glue evenly over the surface. The two off cuts that would supply the second sandwich of the work top were worked into position with the joint coated with glue to lock the two together. A final coat of glue on the second layer and it was time to place the last board on and start the clamping process.

I decided to clamp one end first to stabilize the three layers and it would allow me to push the inner section so that the joint would be tight together before clamping the free end. With the layers locked in the rest of the clamps were applied using mixing sticks as pads to reduce marring to the work top. Fortunately the wings of the extension were skeleton style so I could clamp between the ribs otherwise the throat of the clamps would have been too shallow.

To apply weight to the middle I used the full clay boxes that would be used for my clay modeling project, these weigh in at 60lbs each so three of these were more than enough to hold the laminate of plywood down. If I didn’t have these at hand I would have had to clamp two by fours across the width that had been cut with a slight positive curve to apply the necessary pressure to the middle part of the glue up. 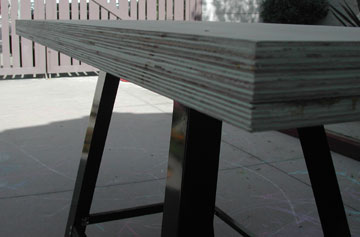 I had glued up the bench top during the morning so after four hours the top was sufficiently cured so that I could unclamp and trim the edges of the top.

The width would be as wide as possible, all I had to do was remove the uneven edge on my table saw. As you can imagine there was plenty of weight with the whole sheet condensed into a twenty four by sixty inch top. It was important to set out my roller supports to catch the sheet as it came off the table saw as I would not have any control after it past beyond the anti kick back knives. I made sure to re-wax the cast iron top of the table saw to ease the amount of pressure needed to move the board and I was pleasantly surprised at how easy it was. This allowed for plenty of control while I pushed it through the saw blade and resulted in a crisp clean cut.

For the ends I would have to use a portable power planer as this would be the best way to get a decent finish without too much effort. Any adjustment could be made with a hand plane but I didn’t hit any snags and ended up with all edges smooth and square. For now I had a top and I could move forward and construct the base from the spare lumber, I will eventually edge the top with pine before fitting it to the base but first I have to get the basics together so the next stage is the base.