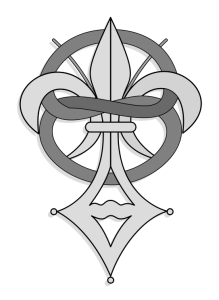 While reading the Da Vinci Code novel by Dan Brown this summer I was thoroughly intrigued by the many layers that were going on at the same time together with the various elements that came into play and being curious I decided to take the time to research the internet to see if any references could be made to any of these particular instances. I knew that this novel had caused a stir amongst the religious sectors due to speculations and misrepresentations said to be portrayed throughout this novel but the impression was enough to seek further reading.

I had a notion that I could design a unique Lovespoon around some of these elements and I started off by first visiting the Wikipedia with a reference to the Priory of Sion. It was there that I found the official emblem of the Priory of Sion which incorporated a fleur-de-lis, intricate enough to make a great focal point for the start of my Lovespoon design.

The other strong elements that had been referenced during the reading was an equal sided cross and a five petal rose that was inlaid into the rosewood box that would encase the cryptex. These two prominent elements together with a heart would make for a strong design and are quite often primary elements in most traditional Lovespoons.

Deciding the layout for the Lovespoon would take up several drafts as I maneuvered each of the elements to find the best position. The head of the Lovespoon would be the official emblem of the Priory of Sion simply because it was the most dominating element.

The base of the emblem was shaped perfectly for a heart to nestle into the lines leaving me with just the Celtic Cross and the five petal rose to position.

To simplify the final positioning I sketched out the shape of the spoon bowl and as I normally do I scribed some lines that would indicate a handle. Thinking of one of my previous Lovespoons I thought I’d try placing the five petal rose as if it had grown from the spoon bowl and once in position the design instantly looked settled. The last element, the Celtic Cross would rest between the heart and the five petal rose.

I was considering whether to carve the petals of the rose as I had with the Daffodil Lovespoon but thought that a traditional Celtic Knotwork would be more suitable for this design, it would lighten up the overall look but as with most of my carvings the design is still fluid throughout the development stage. While I’m in the process of carving, ideas develop and can influence the overall shape so I try to leave some of the larger elements open for futher exploration until the very last moment. It is often the case that the best idea comes at the last moment when most of the shape is carved in.

Feeling quite settled on the order of things, I decided to plot out the spoon in its entirety giving me a good indication of the overall length. I had noticed that there were a lot of delicate areas to this Lovespoon and I hadn’t even started to consider the species of wood I would use but with the fine details it would have to be something that was reasonably hard and close grained, possibly birch.

Something I would have to ponder on while setting the final design and to which, I will show you the final layout in the next post.