With the detailing of the heart and cross complete I am now ready to tackle the main feature of the Lovespoon, the emblem of the Priory of Sion. This is unique enough to be one of the focal points of this carving and the most intricate to get the detailing to stand out so while I have been carving the rest of the Lovespoon I have been thinking about the best way to approach this stage, which for me is an ideal approach. I can slowly work the details that I already know how I want them and casually work out the other details in the mean time.

My first goal was to offset the fleur-de-lis to the surrounding, by doing this it will allow me to carve a subtle shape giving it more dimension and a more lily like flower arrangement. Much of the carving for this is in the way of cutting on the detail line with a knife then chipping down with a micro chisel to gain some shape. The deeper the knife cut the more likelihood of chip out from the exposed end grain so at this stage I am being careful not to try and pry the chips out but making sure that it is cut away completely. 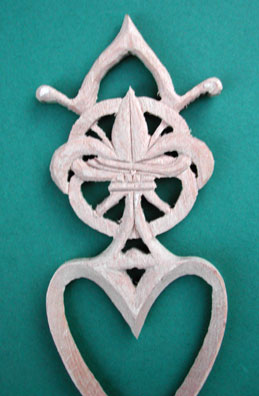 The knotwork that surrounds the fleur-de-lis is rebated back one third of the total thickness of the carving on both sides giving enough room to shape the fleur-de-lis so that it will standout from the surrounding form.

The knotwork that surrounds the fleur-de-lis is worked in unison so that the shape compliments each other and the exposed end grain is reduced at the same time. Once it starts to take shape fine sand paper is used to further roll the surface and crisp the detail so that it stands out from the surrounding surface, much of the time you will find is in the finishing work which generally accounts for fifty percent of the time. The image to the left gives a rough idea how the emblem will look but right now it’s a long way from being complete.

The reverse side will get the same treatment but the difference is it will flow a lot quicker as all aspects of the design have been decided on the first side.

The last part of the carving is to shape the flame that tops the Lovespoon, here I have incorporated little flower buds or round baubles that continue the theme of the emblem that would otherwise looked a little static. This small detail draws your eye to the center of the emblem where much of the detail takes place. Small hand palm chisels are used to take the edges off until there is resembling of a bud, edges are taken off the flame ensure that the tip remains sharp just as a real flame would flicker.

For a carving of this magnitude some eleven and a half inches in length the clean up of the details will take between four to six hours or even longer. Several grades of sand paper will be used to smooth out the shape and chisels or gouges will be used to sweeten details that were missed the first time around but as you know in any handmade carving, the next time I make this same design it will be slightly different from the first, guaranteeing each one in itself is unique.