As you have probably noticed during the course of reading my Welsh Lovespoon carvings, almost all have been made what I call normal size, that is, six inches or larger but recently I have had several enquiries as to whether I make wedding favor size lovespoons. Of course most of these emails are from people who have seen items that I have been selling on eBay and are genuinely interested in the carvings that I do and that is as far as it goes but after reading one particular email it first sent me into a panic. This was a firm enquiry about making Wedding Favor Lovespoons.

As you all know carving is a part time venture that I enjoy doing during my lunch break and many of the more intricate lovespoons can take up to two weeks to complete so you can imagine the predicament I would be in if I had to produce several dozen wedding favors in a relatively short space of time.

These small offerings normally four inches or less in size can be as intricate as their bigger brothers which means using smaller tools but that was not the issue worrying me, it was the possibility of having to produce multiples of the same item at short notice. All sorts of scenarios were playing in my mind, one would take possibly three hours by the time it was carved, then sanded and wax polished and that would be the best case scenario for a simple design so multiple that by the said number and who knows what the actual time frame would be. By this time, just looking at the email was giving me a headache, trying to work out the best way to approach the situation and I hadn’t even made contact to see what the real scope of the work would be. I was envisioning many late nights as lunch hours were not going to get the job done.

My first thoughts were to email back and ask what was the expected delivery date and how many items would be required before we got into any specifics about designs. The next question would be, what sort of elements were you looking to have incorporated in the design and would there be any specific timber that you are partial to and would prefer to be used. 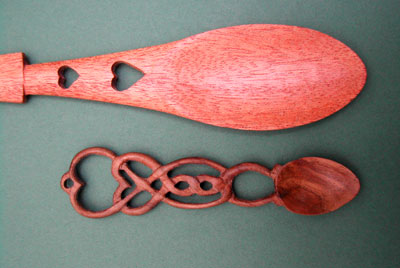 Well as you can imagine, the email addressed my thoughts that were running rampant at the time and must have brought a smile to the face of the lady who was enquiring. She had been bidding on one of my lovespoons on eBay and had been pipped at the post and wanted initially a repeat of the large lovespoon that had just been sold. This I had already started and when the additional request for wedding favor lovespoons came through I was much relieved to find it was a repeat customer who wanted to fill a couple of spaces in her collection.

To fill this custom order I developed four designs using elements from some of my previous designs but scaled down to the miniture size. Her initial reaction was to leave the design to me but would like knots and hearts if possible and she was partial to walnut as a choice of wood. With those instructions the final choice was of a classic design that is very popular and one of the more intricate to make especially at the size it would be made. As you can see from the image the large lovespoon bowl is approximately two inches in length and the overall length of the wedding favor lovespoon is four inches.

The one thing I learnt from this experience is to find out the full story before worrying about how to get it done. Don’t get ahead of yourself otherwise it becomes just like a bad dream and the purpose and beauty of actually making the carving becomes a chore, even though at the time I was pretty amped up about the prospect of making multiples of a set design.

To keep it in perspective, the most important aspect of doing these carvings for me is to retain the peace of mind and the pleasure that the carving brings, by being happy with what you are doing will ultimately be reflected by the end result.