With Spring just around the corner the natural course for me would be to design a Lovespoon that represents those small details that we associate with that special time of year. The blossoming of the trees, birds vying for a mate and ourselves becoming more romantic on a daily basis. This Valentine’s day just past was the beginning as couples try to break from that wintery grip so what better than to share my thoughts on what I should carve.

For me living on the West Coast that wintery feel is only mild to what grips the rest of the country, so having said that, what should I offer in terms of elements for that special lovespoon?

The first thoughts that come to mind when I think about Spring, is love. At this time of year as the days get longer and the temperature rises a few degrees, everyone tends to be cheerier, friendlier in anticipation of the coming warmer months. The first design element I would use, would be the shape of the spoon bowl and in this case it would not be a regular shaped spoon. 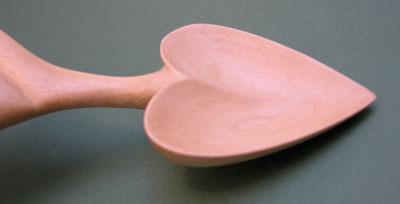 I had come to like making heart shaped spoon bowls, they give the feeling of being more personal and intimate, a kind of offering in plenty if that makes any sense.

Getting the shape just right is important to me so I spend time drawing the shape in the first instance and always adjust as I start the carving. The thickness of the timber is also important to attain that right amount of fullness and I still haven’t quite worked out the best thickness for all of my lovespoons but I guess that really doesn’t matter providing the end result looks good. 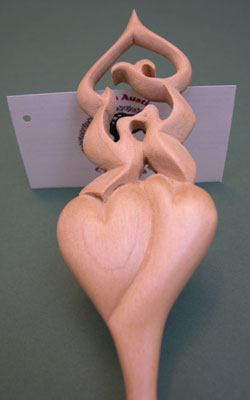 Now that I had established that the spoon bowl would be heart shaped I decided to continue the theme with a couple of hearts that appear to be embracing and would also appear as one heart. This element would grow from the heart shaped spoon bowl similar to a flower in early spring. It was important to carve as much fullness into the shape as possible to give the impression of a heart full of love.

I noticed during the course of carving the hearts that as I cut through the various levels of the growth rings that the heart shape would be mimicked giving a nice extra element to the carving. This was more noticeable on the darker rings that probably indicated a year that was drier than most.

For the upper level of the carving I had opted for a pair of doves, these doves would be positioned so that they would give the impression of kissing. Many times during the spring you will see these birds going through their courting ritual with wings fluttering as they dance to attract a prospective mate. The spread of the tail feathers would appear to straddle the upper portion of the heart giving the birds balance and dimension.

The final element I had decided on for this spring time lovespoon was an ornate flame. This one element would cement the entire theme together, it had to give the appearance that it was dancing so the end should be a sharp as possible. This proved to be a little tricky as each time the tip would tend to shear off especially as I wanted the top to become very upright. To gain that extra bit I needed I ended up sanding the edges rather than cutting with a chisel, this finally gave the very sharp tip that you see in the image.

The material I used for this carving was Bass wood which is extremely good for carving and once sanded with a fine grit will polish beautifully. Several layers of paste wax brushed on and buffed to a high sheen will seal the grain and if sanded with very fine sandpaper afterwards, the wax will be burnished further into the grain. A final coat of paste wax will shine the wood to a silky smooth finish giving the wood a nice warm glow, perfect for a Lovespoon destined for spring. 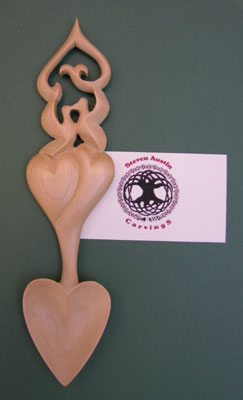 One thought on “A Lovespoon for Spring Time”