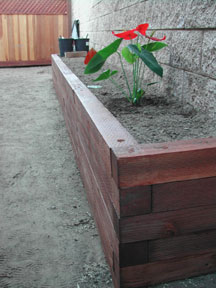 The block wall that seperated the mobile home estate from her trailer was approximately eight feet tall with a concrete base that spread loosely below. This in effect reduced the growing room so we had to make sure that there was enough soil at ground level at the small end of the wedge so that the plant roots could travel deeper if required. Another requirement was to leave enough room between the planter box and the mobile home, so the placement of the first stake would be at this critical point. With string attached to the first stake, the second stake position and angle of the planter would be determined by the taut string once hammered into place.

Now that alignment was set I could remove any soil that would hinder the placement of the first 4″ x 4″ and continue to a length of twenty feet or two and a half lengths. I then cut the corresponding lengths that would tie into the block wall, these had to be cut a little short due to the foundation concrete that spilled out from underneath. The next five layers were cut block wall style, overlaying each seam to strengthen the total constuction with no vertical seams. 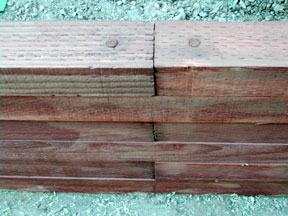 With all the layers of the first planter box in position I had to drill the first set of holes that would pin the construction into place. The rebar was of half an inch in diameter therefore I would drill holes of 5/8″ to allow slight misalignment as I drilled through the layers. The spade bit would drill through the four inch thickness and index to the next layer whereas I would remove the top layer and continue with the drilling until the full six layers had been drilled.

Starting from the bottom layer each level was restacked using lengths of rebar to align each set of holes. As the levels got higher I was finding that the clearance hole of 5/8″ was coming into its own. By the time the sixth layer was set in place the rebar had to be hammered down to fully secure the sections and finally sledgehammered the additional length of rebar into the soil to give it a solid construction.

With the rebar fully hammered home the rebar was punched below the surface of the wood by approximately one inch so that a plug could be inserted to give a finished appearance. This was simply 5/8″ dowel rod cut to length and hammered in to complete the look. 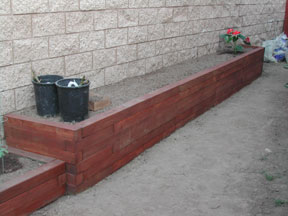 With the main planter box in place I could turn my attention to the secondary planter, this would consist of only three boards high giving enough depth to house tomato plants. The totally length for this box would be twelve feet and adopting the same procedure the construction went smoothly with no major problems. The green colored timber eventually gained a stain that would give it a redwood color and blended it nicely with the block wall to the rear.

I found that even though the rebar had been set to a good depth there was still a little movement in the planter boxes but once back filled with the remaining soil it placed enough pressure to eliminate any movement. I knew that I still had to place flagstone and this would account for two to three inches in depth with the levelling sand, locking in the bottom board.

Since starting this project the planter boxes have remained in good shape and the only movement is with the plugs that cover the rebar tips, these have moved just 1/8″ proud of the main surface which I put down to soil movement and swelling of the wood due to moisture.

My next step is to build the arbor that will adjoin the privacy fencing that allows the rear of the coach to be that more private.