Now a year later and attaining the level of brown belt he was going to be part of that event but would he enter for both sparring and Poomse.

The Poomse part of the competition was not a problem he could overcome his nerves once the competition started, he was a strong competitor and had managed to gain first place in his Victory club run Poomse competition earlier in the year where probably a total of one hundred and fifty competitors of all belt levels had attended. At this event, The JKI, there would be a minimum total of four hundred competitors that would take up the entire Saturday from the opening ceremony at 9:00am to the last sparring competition at 8:00pm spread over a total of eleven rings, let alone the spectators supporting the competitors. 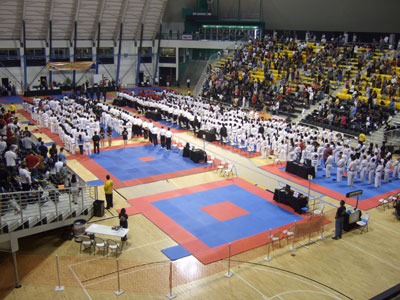 His instructors Master Chris and Master Claire had been training all the students for many weeks to prepare them for this event. Master Chris had spent countless hours going over the techniques for sparring and had held additional training time for those who wanted to be at the peak of their game come that day. Master Claire had perfected the students on their forms or Poomse to ensure their technique was good and at the right speed and strength to give them the best possible chance to impress the judges.

With two weeks to go before the tournament and the registration deadline looming Master Chris assessed each student and suggested what he felt would be their strengths, in Jackson’s case he said that he should enter both Poomse and Sparring. Jackson was extremely nervous with being entered into sparring but as Master Chris pointed out it is not about winning, it’s about what you can learn from the experience. He said that in his first competiton he had failed to win but had come back with a wealth of knowledge and became stronger the next time because of what he had learned at that competiton. With that said the relevant information was jotted down on a card together with weight and rank providing us with the necessary information so that we could register him for the competition online.

Reluctantly Jackson said he would try his best and that night we enrolled him for the forth coming tournament in both disciplines. 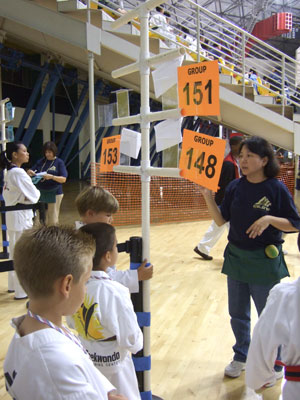 Over the next two weeks training was intense trying to perfect both sparring and poomse, extra lessons were provided for those who wanted to attend and Grand Master Kim provided an open Sunday for a select few of his students giving them invaluable additional training. Jackson benefitted from this extra training but at some point he began to become confused with some of his poomse with the slight nuances between Grand Master’s technique and his daughter Master Claire’s. The difference between the two was a slight change in one of the moves where a more modern version was used by Master Claire. He insisted that he was doing it wrong but once we conferred with Master Claire she explained that both versions were correct and that he would be displaying the modern version.

Still skeptical leading up to the competition he even announced that he just wanted to compete in sparring. With his stress level rising because of the forthcoming tournament now was the time to backoff and have several days leave from the studio.

It’s amazing what a couple of rest days can do, he was back to his buoyant self. With one day to go, he was looking forward to the challenge, knowing he would be borrowing his friends Nintendo DS to help him during the waiting period, easing any anxiety that he may have been having. The morning of the competition was an early start, we had to meet at the Walter Pyramid to collect his credentials and buy our entrance tickets. The doors would open at 8:00am with the opening ceremony at 9:00am with the onset of the competition with poomse starting at 9:45am, his group number was 151.

With the group number starting at 100 a couple of hours would pass before his number would be displayed allowing for several practice runs behind the bleachers. He asked Jose, a second degree black belt if he was nervous and he assured Jackson that he was always nervous before competing which helped him with his own nervousness. Finally his group number is displayed and it’s off to the holding area until a ring becomes available, of course it’s the furthest from our seating arrangement. My wife races over to the otherside of the stadium to video the advent and I stay and capture it with my camera. The Brown belt poomse for our sons group resulted in a victory for him laying rest a lot of nervousness, with one part of the competition complete it is now a waiting game until the sparring starts.

I would have liked to display the video that my wife captured but it was way too large to be displayed so please forgive my poor efforts.