With the first part of the JKI tournament under his belt Jackson was now in a waiting game until his group number would once again be displayed. We could tell by his uneasiness that this was the one part of the competition that he was most nervous about. The display board highlighted group numbers 300 through 307 and with his at 346, there would be a while to go before he’ll make his way down to the holding area.

We decided to watch several sessions of the sparring to see how quickly they would call the group numbers, then knowing the time lapse we found it an ideal time to get something to eat and drink and at the same time it would reduce the stress level for both him and us. The usual selection of event food was available so we opted for the pizza with Gatorade which would give him energy when the time comes.

Once he started eating he definitely started to perk up, he needed that energy boost and not a moment too soon as we noticed that the groups were moving a lot faster than before and it was time for him to don the protective pads. The gum shield had been reformed during the past week since his adult teeth were in and all other pads had had their day with the washing machine as they had taken on a distinct gamey smell after all the practice during the previous weeks. A quick trip to the bathroom and fitting of the groin protection cup hid nicely beneath the uniform giving little indication to the spectating public, unlike some of the competitors who opted to display their cup outside their uniform!

With the display board now reading groups 331-337 we made our way out of the viewing stand and down to the lower level where the competitors were making their way to the holding area. At the entrance we came across some of the older members of the club who were very supportive and gave Jackson extra coaching until it was time to line up by their group number ready to be led to the holding area.

Once his group was led away we made our way back to the stands watching to see which section of the hall his bout would take place. We were hoping that it would be in front of the Victory club group stand but of course it was the furthest mat away. With cameras in hand we made our way over, hoping to capture the match on video and hoping that the families in that section would tolerate us taking a couple of spots near the railings. The event personnel would not allow any blocking of the stairway, obviously for safety reasons but nonetheless highly annoying when you’re trying to get the best shots. 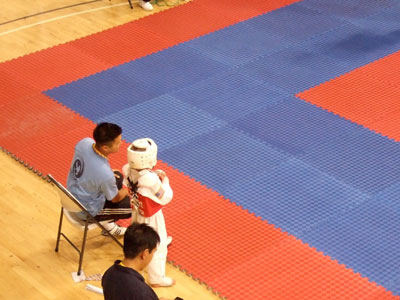 We had initially placed his body pad with the blue facing out but watching him with coach Master Chris he had to change to the reverse color of red because his opponent was wearing blue. I assumed that Jackson had to change because his opponent was of a high belt grade so with that complete and a pep talk from Master Chris they were both called together and the start of sparring round 1 was under way.

The next mat over at exactly the same time, the first black belt match for the club was about to start. I thought to myself, Jackson really needs the support right now as I’m sure he is really nervous but I need not worry as Grandmaster Kim took over from his son Master Chris. The first round ended with Jackson holding a one point lead and looking the stronger and more aggressive of the two, a pleasant surprise for me as he was certainly concerned earlier.

Grandmaster sat Jackson down as in a boxing ring removing his gum shield, supplied the water and a brief pep talk and a good pat to the chest padding before setting him out to the center ready for the start of sparring round 2. As I said earlier, to capture the video would be hard without blocking the stairway so I must apologize for the unsteadiness as the yellow jackets decended upon us! With round two underway Jackson was quick to extend his lead to two points, attacking, dodging, faking and all the tricks he had learnt under the guidance of the Grandmaster and the Masters.

He was but 30 seconds away from the end of the bout and certain victory when his ribbon became untied from his chest protection resulting in a timeout. Once the ribbon was retied Jackson attacked before the referee announced the start, sending the referee to stop the bout and speaking to him. I’m sure this broke his concentration allowing his opponent to score a quick couple of points and draw level. Time was running out for both of them, each trying to deliver the decisive kick or punch that would give them victory but with time expiring each competitor returned to their seat awaiting the verdict of the judges and what would happen next.