The Jimmy Kim Invitational Tae Kwon Do Championship at the Walter Pyramid had seen the end of the Poomse part of the program and we were deep into our sons sparring where he had gone two, one minute rounds with the score cards at two points a piece. His opponent was a red belt and Jackson at present was a brown belt, theoretically this should give his opponent the edge with the more experience.

Victory Tae Kwon Do club starts their students sparring at the point when they reach orange belt status so if this is the same for most clubs his opponent would have four to six months additional experience with sparring even though their ages would be very close to each other. For Jackson to gain a win he would have to be quick on his toes and mindful of what his opponent was up to.

With the conclusion of the second round the referee conferred with the judges to decide which course of action would decide the outcome of this bout. From our position in the stands I could only conclude that when the referee brought the two coaches together it had been decided that there would be one more round and the person who scored the first point would win the match. With this information the coaches strategized with their students and for me my nerves were going haywire so I can only guess at the state of mind for the guys on the mat.

With Jackson and his opponent set in the middle facing off, the referee signaled the start of the final round, the sparring sudden death round. The one who attacked and also defended the best would become the winner.

There was no doubt in Jackson’s mind that he wanted to win, right from the off he set about the task of scoring that decisive point and at the same time remained fleet of foot. Several combinations of snap kicks would put his opponent on the defense and a decisive push kick eventually settled the match. A well deserved win in his first ever sparring competition and also the most important thing, laying to rest the fears that had remained with him since last years competion. 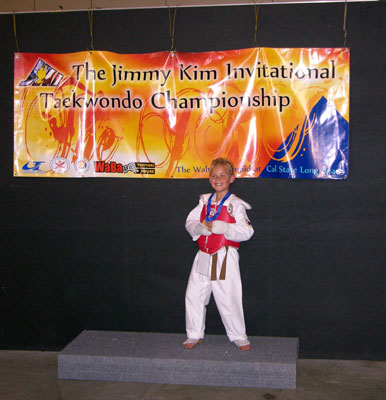 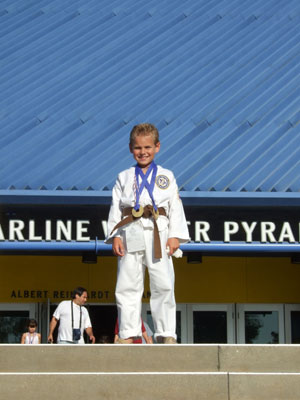 With both parts of the competition behind him we could now relax and enjoy the rest of the competition and the remaining competitors and of course the picture that tells the story, two gold medals outside the Walter Pyramid accompanied by a big smile.