It’s been a long time since I’ve posted an article mainly because of being mentally drained from excessive driving on one of the most congestive motorway systems in the world, Los Angeles, but that’s really no excuse, so having said that, I just need to dig in and post!

One of the latest carvings that I’ve embarked upon was a combination of designs that I had made for various people. I wanted to reuse some of the elements to provide the basis of this new lovespoon. In this particular design I had previously developed a twenty fifth wedding anniversary lovespoon that also had roses and hearts surrounding the pair of hearts. The center heart had the number twenty five carved internally so with that basic image I decided to eliminate quite a few of the elements to get back to basics to provide the foundation for this lovespoon.

One of the favorite elements for my lovespoons is a flame design that adorns the top, this adds an attractive end to the carving and also provides a way of displaying the carving by way of hanging it on the wall or in a cabinet, so with that in mind that was where I would start, that was a given.

With the theme completely worked out, the tracing was transfered to the basswood blank ready to embark on carving out the shape. My first job is to drill each corner with a 1/16 inch drill bit so as to be able to fit the blade of my fret saw and to create a clean cut in those awkward areas.

I had given up with using a power fret saw a long time ago, much of the time was wasted on breaking blades and continually threading the blade into small areas. Most of my designs would amount to little sawing in a lot of areas so I’ve opted to using a manual fret saw. I find that during the process of cutting out the design I can work out in my mind how I will carve certain areas and how I will resolve any mishaps if they should occur.

With the blank set up in the woodworkers vise a steady sawing motion eventually cuts out the excess stock leaving just the outside shape to be cut on the bandsaw. With all the profile cut, now was the time to get comfortable and sit with carving gouges, chisels and sanding blocks around my oversize bench hook and carve away at the spoon bowl. Next would be the back of the spoon and then onto the Celtic knotwork. A methodical process that eventually takes that flat piece of timber and turns it into a three dimensional, visually pleasing piece of art.

The final process is to sand out as many imperfections as I can. This stage of the process equates to 50% of the time starting with coarse sandpaper and working through the different grits until the superfine paper is vitually polishing the wood.

A good coat of furniture polish is then buffed into the grain and polished out with a cotton cloth. This process is applied several times until a soft sheen glows from the wood. Any small areas that need to be resanded are done at this stage and with the help of the wax coat it polishes the wood grain leaving it silky smoooth.

The last and final coat of wax is citrus based giving it a light fragrant smell of oranges. This pleasant aroma is the first thing you notice when the packaging is opened at its final destination. 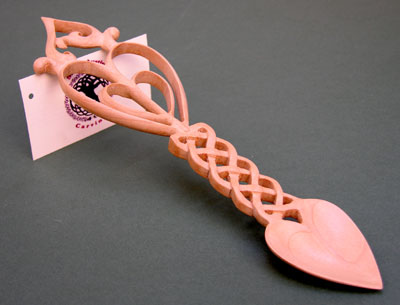 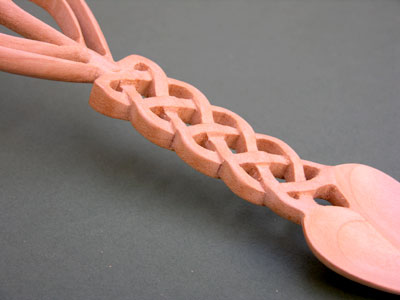 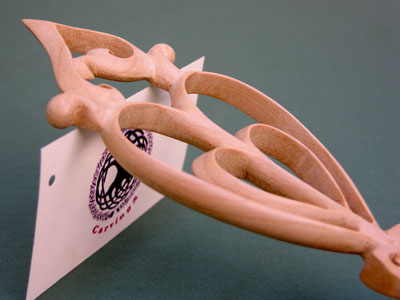 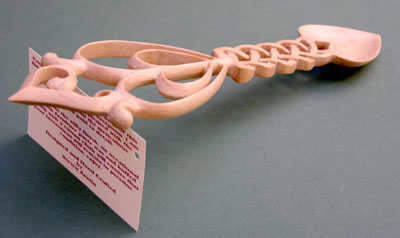 One thought on “Twin Hearts”