The 4th July weekend always offers its challenges, fireworks create mayhem with our dogs especially as they are now legal again in Huntington Beach. We had started the day with an early rise as both children were representing Victory Martial Arts in the Huntington Beach Parade as part of the Demo Team. The overcast day was a reprieve from the searing heat of most 4th July Parades we have walked, especially as we were in the last quarter of the participants. Marching, co-ordination of moves and balloon breaking entertained the crowd as we worked our way along Pacific Coast Highway and then down Main Street.

The crowd were appreciative of the team as they went about their business with waving flags and shouts of encouragement. Breaking balloons sent baby powder and glitter floating into the air, covering the team members with a fine dusting of powder. 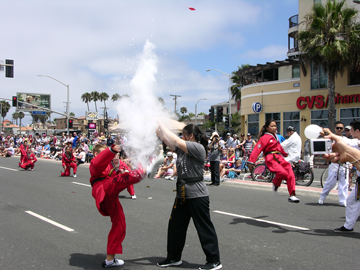 We reached the end at Yorktown and Main Street with a feeling of accomplishment and every member of Victory Martial Arts, proud of their involvement. A quick dismantling of the decorations on the horse drawn floats are folded up ready for the next year before a team photo captures all who were involved. Sore feet and sun burn, even with sunscreen, is evident among the adults yet no one complains, it is another successful parade. 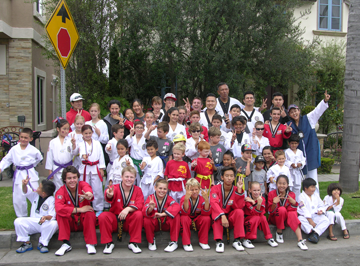