The drive to Bishop was uneventful, the same drive we do each year, the same scenery but just a little dryer. We had finally got away from Big Bear by 10:00 am. The traffic was flowing nicely with none of the congestion that we normally encounter, most likely from people still nursing hangovers or eating breakfast from the previous nights celebrations. We had taken the back route from Big Bear, taking California State Route 18 through the Lucerne Valley on to Apple Valley, through Victorville and dog legged over to U.S. Highway 395.

The day had started off with clear blue skies with a little wispy cloud but as we traveled northwards the cloud was generally thickening up. Over the Sierra Nevada the thick cloud was evident, there was little or no sign of snow pack, long gone from the continuous melt from the record dry seasons, from the previous four years. Watching the cloud build, we were all wondering at what level the alpine lakes would be and would the fishing be of the same quality that we had become accustomed to.

The U.S. Highway 395 had been upgraded with new asphalt and widened by a lane, this had been an ongoing operation the last time we had traveled this way and thankfully it was all complete, making for a smooth ride. The temperature was in the low 90’s about ten degrees less than normal but another welcoming break, giving the air conditioning a chance to do its job. The dogs were relaxed, Murphy was an old hand at this type of travel and Rosie, this was totally new to her, alternated between the floor of the truck and the rear bench seat.

We had decided to gas up at Lone Pine and catch a bite to eat at the Carl’s Jr. drive through, we were on schedule and everyone was becoming restless with the need for a break. Burgers and fries in their various forms plus two large half pound beef patties, one each for the dogs, together with two milk shakes and two sodas. This was a welcome lunch as we still had to drive to Bishop passing through Independence and Big Pine on the way.

Lunch completed, everyone watered and off we go, the sky is getting darker by the minute and we are sure that rain is imminent. Before long the skies open, lightening followed by distant thunder in the direction that we are going makes us wonder what we are in store for. The time to travel from Lone Pine to Bishop is just over an hour and the weather does not improve. We find the rangers station to collect the wilderness permit, it’s raining large pea size drops that quickly soak the asphalt. A dash for the door and in, there’s one person in front before collecting the permit, the normal information is offered, no open fires in the wilderness, bear vaults, clothing, carry trash out and so on. With the permit now collected it’s back to Big Pine some fifteen miles away to hit the road that will take us to the trail head and an overnight stay at one of the camp grounds. We are hoping for a break in the weather so we can at least set up the tent for the night.

We reach the over night parking for the trail head and drive past to find the nearest camp ground, approximately one mile away, here we find a spot close to bathrooms with a cost of $21.00 a night. Setting up camp is a breeze, we have the Big Agnes Copper Spur four person tent that is easily distributed among the backpacks. This tent is not only light but strong at the same time especially with four people. The rain has dispersed, backpacks are stored in the large stationary bear vault at the camp site and the dogs are each on their separate long lines, tethered to the nearest tree by the tent. The truck now has to be driven to the trail head one mile away and Pam, my wife takes it, she’s such a trooper, parking and running back while I’m organizing the bear locker. 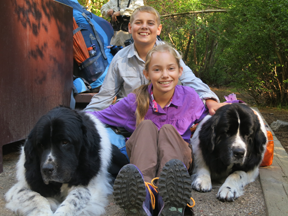 We snack down on the trail food wishing we had picked up something extra for the overnight stay but who would know we would be that hungry after the large amount of food we had previously ate. Walking around the campground gave us a chance to view the sites, a stream ran along side with trout swimming against the current picking any flies that would come their way. Night was closing in as we met up with a local who gave us an overview of the trail we would be climbing in the morning, good information is always welcome and removes any doubts on the direction we should go.

It’s time to call it a night, the dogs are settled down in the vestibule and we are going to play Phase 10, a game that entertains the whole family. Sleep is catching us up, we want to be on the trail early to escape the heat, approximately six miles to reach our destination between second and third lake.