The annual My Dog’s Face Contest has kicked off today in the Orange County Register and we thought why not submit Murphy our thirteen month old Newfoundland puppy. This little guy at 110lbs will slobber you like no tomorrow being the lean all swimming machine that he is. Visiting the dog beach at Huntington Beach with bumper in tow, that is the small type that floats and not the item that protects your vehicle, he will crash into the surf to retrieve it for hours on end. The only time he relaxes is to take a drink or visit with some passing canine that takes his fancy, then the fun begins with a race up the beach.

The year since we got him has passed in a flash with all sorts of peculiar happenings that we have never experienced before, like the time that his puppy teeth had to be knocked out with a hammer at the vets because they were so strong that the adult teeth were forming crooked. He was gnawing the wooden chair rails, he was gnawing the chair legs, he would shred dried queen palm fronds in minutes, we had large leg bones that he would splinter during his teething to try and relieve the pain and pressure and still they would not budge. In the vets own words, “I have never experienced this in all my years as a vet” but once out the adult teeth straightened up nicely and also saved our chairs. END_OF_DOCUMENT_TOKEN_TO_BE_REPLACED

What an eventful week, little did we know that we would have a new puppy this time last week but now he has settled in, it’s as though we have had him forever. That first day, Monday after my wife collected him, resulted in an instant phone call enroute to our home. In the background I could hear the telltale sign of a puppy who is unclear as to what has just happened, that crying from a small puppy who is in the traveling crate at the back of the truck, on its way to our home. That small puppy weighs 12.5 pounds, not bad for a 7 week and 3 day old pup.

These dogs are known to grow to 160 pounds and over so it’s important that the growth is controlled to prevent any growth related problems. We had already decided to take him to a vet that had been recommended by Karrie Cook, one of the members of the Newfoundland Club of Southern California who we are members of and have been for the last twelve years. We have always had that unsatisfactory feeling with our previous vets who we felt had very little experience with big dogs so it was quite refreshing to get some kind of recommendation. I guess it’s just the generalization of all animals and no specific expertise on one that we were looking for. We wanted someone who was passionate about the dogs that we like and according to Karrie he deals with a lot of Newfs, especially rescued Newfs. The appointment has been set up for our visit to the Arbor Animal Hospital in Irvine so it will be interesting to see the difference in service. END_OF_DOCUMENT_TOKEN_TO_BE_REPLACED

It seems such a short time ago that we had to euthanize our pet Newfoundland after nearly 12 years of loyalty. He had been suffering with limited mobility for some time until he slipped on the tiled floor making him virtually paralyzed. Even though he regained a little mobility the majority of the time was spent aiding him with the help of a harness.

That was nearly twenty months ago, he was a Landseer, a black and white version of the traditionally black colored Newfoundland. We at that time still had his older half brother and his health was just as poor but already stricken with grief we toughed it out knowing the inevitable for him was only months away. That time came when he had continual bleeding from the mouth with it being diagnosed as cancer of the jaw, at 13 years and 1 month his ability to withstand any treatment was out of the question. His mobility was already restricted, appetite was none existent and he had to be helped with any normal functions by using a harness. Our once majestic animals had succumbed to old age and both had died within six weeks of each other leaving our household unusually dog free. That was a hard first three months of 2006 and only now can I start to talk about it and still not in much detail because of the feelings that I have. Call it soft but that’s how it is when you have animals that are part of your family. END_OF_DOCUMENT_TOKEN_TO_BE_REPLACED

Saturday January 21st 2006 will always be etched into my mind, that was the day my dog, a Newfoundland was as they say “put to sleep”. At 11 years and 9 months he wasn’t young by any means and at 145 pounds he wasn’t small. The last 6 months have seen his health deteriorate quite considerably and we put that down to his age. During that period he had trouble finding his feet in our tiled family room and one night he must of splayed out as we found him in the morning unable to move. END_OF_DOCUMENT_TOKEN_TO_BE_REPLACED 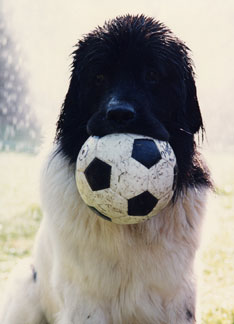 This gallery photograph of our Newfoundland Dog, “Biggles”, proudly posing after his quick intervention in a game of soccer. END_OF_DOCUMENT_TOKEN_TO_BE_REPLACED

Have you ever considered how old a dog is when he or she reaches the age of ten or above? Let’s talk a little about our Newfoundland Dogs. END_OF_DOCUMENT_TOKEN_TO_BE_REPLACED

During this summer the “high” was right above us. The temperatures were soaring into the high 90’s and low 100’s, with flies abundant and our dogs were drooling up a storm.

It’s not as though we’re not familiar to the occasional slobber from the dogs but man this was something else. Newfoundlands are re-known for drooling when they get hot, END_OF_DOCUMENT_TOKEN_TO_BE_REPLACED