In the interim of carving a couple of large Welsh Lovespoons, I’ve had a small piece of Poplar that I wanted to use to produce a carving of 6 inches by 2 inches, this size carving is always enjoyable because the carving is smaller and more manageable. It can comfortably be worked by sitting down at a bench and carving with smaller palm held tools that are easily available through Ashley Iles and Pfeil. With this type of tool you can easily manipulate with control one handed but be careful, do not slip as they are razor sharp.

While this project has just finished I thought I might share the methods that I used in producing this latest Welsh Lovespoon.

In this particular carving I wanted to convey togetherness, so what better to have in a carving than hearts and vines. Yes, it is a simple design but it can also be elegant in execution. I would have a heart shaped spoon bowl with vines twining to a pair of hearts and the vine continuing beyond into a clover shape. When you decide on a design for a carving it doesn’t have to be the most intricate in the world, simplicity allows for better self expression. To give you a better idea I have some images of the work. 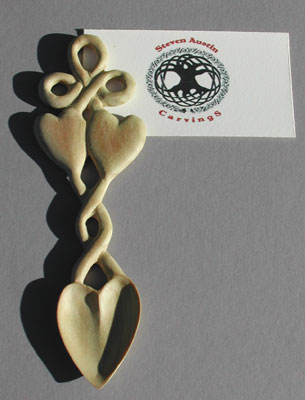 This design was a quick free hand sketch on top of the poplar wood blank, no particular attention was paid to ensure symmetry. I thought it would look more natural with a random free flowing expression.

If you have a particular vision or design that you want to execute, put it to paper as soon as possible or in this case it was straight on top of the wood itself. Never say “I’ll do that later ” because that vision will have been lost in the haze, those first impressions are the most forceful and will never be captured at a later date. This you will find applies to what ever your subject matter is and for me it is the design of the carving, the actual carving of the form is not the issue.

Carving the Poplar with a sharp chisel and gouge removes the material easily but care has to be taken not to run against the grain. Once it tears then there is no turning back. The rip in the timber will be hard to disguise especially if it runs deep. This is extremely important when carving the vines as this is the most delicate part of the carving. The vine needs to look as natural as possible, that is, not too bulky but strong enough so as not to be susceptible to breaking while being handled.

In other words they don’t have to be perfectly round, they can have lumps and slight undulations exactly as you would see in the shape of a real vine.

I like carving the bowl of the spoon to achieve a very thin edge on the lip, with the base of the spoon being full and round. To me, this gives a distinct quality to the carving. I have seen on many other types of Welsh Lovespoon with the bowl only being scolloped out. This gives a very thick edge and an impression of being two dimensional rather than three dimensional but that is only my opinion, even if the thickness of the blank you are using is minimal this fullness can still be achieved.

To me the spoon bowl is one of the most important aspects of the Welsh Lovespoon, this is the focal point of the carving and it is here that all the other elements blossom from. If you plant a firm bulb, then you expect a good flower from it, the same goes for carving the spoon bowl. When carving the spoon bowl try and get as much depth as the thickness will allow without breaking through, then when shaping the back face of the bowl you are following the inner shape and eventually the form will be delicate and thin.

The most important thing about carving is to allow freedom of expression, that is, don’t get too bogged down with being exactly symmetrical or constant in thickness. The carving needs to express some of your own personality so that it has a life of its own. Experiment with different forms until you find your groove then expand on that. There’s going to be plenty of times when the carving will be discarded but at the same time a lesson will be learnt preparing you for the next one.

I have found times when I have discarded a carving into the scrap bin and after a few hours have thought of a resolution that will correct the first mistake so never give up, have patience and have fun. 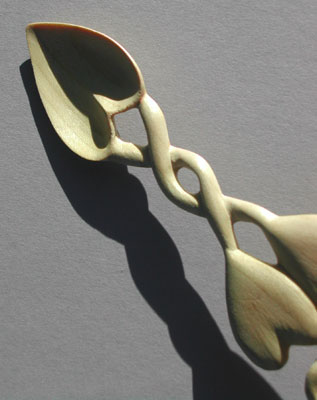