It is very rare that I have the opportunity to make a duplicate Welsh Lovespoon after I have sold one on ebay. I tend to use ebay purely as a feedback engine and rely on the amount of hits and possible bids on the carving to see how the design is received. The last carving that I put up was received quite well with a reasonable amount of hits, about fifty. My own assessment of the carving was that it may appeal to people who would like to offer it as a unique gift to friends or family who are getting married. As in a previous post, “Two Hearts Equals One” it was a small carving of 6″ x 2″ made from Popular, a hard timber that is readily available from Home Depot. 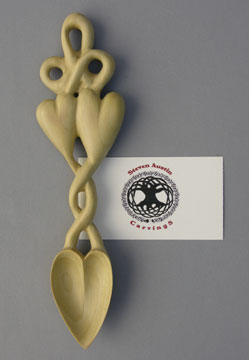 After the closing of the auction in which several people were duking it out for the rights of this sale, I was quite surprised to receive an email lamenting at the lost of the auction due to a malfunction of their computer system. In essence, I was asked would I be duplicating that Welsh Lovespoon any time soon. I had to point out that my full time job was at full steam at this moment in time and finding the additonal spare time would be a stretch.

This email explained to me that it was going to be for a daughter who had just become engaged to be married and they would wait for my next creation to go on sale.

I know I’m not a very good person to say no to a request and sending an email saying I had very little time to create a new one left me feeling a little depressed. I’m also thinking that I know that I work best when there is little room to maneuver.

With that said I’d decided that I will make another of the same design but bigger and with more volumn, to give it additional form. In these instances where I am making the carving for an actual person the carving takes on a more personal meaning. The shaping of the heart shaped spoon and the carving of the vines has to be crisp and fluid. Sanding of the spoon has to be done in various grades of sandpaper to remove all of the deep scratches and several layers of wax need to be applied to achieve a smooth silky finish. I find it easier to create a carving for a personal sale than one that is going for auction, auctions are so impersonal.

Even though the quality on each individual spoon that I create is the same, the state of mind is different giving an extra boost to ensure a good quality product. That carving has now been delivered and I hope that the person who received it gets as much enjoyment from it as I did in carving it.

2 thoughts on “The Beauty of a Commissioned Piece”