I had been thinking of various designs for my next Welsh Lovespoon and what elements are held dearly to any person of Welsh decent. The Daffodil is the national flower of Wales and I had recently purchased a length of Basswood so this would give the ideal tones for the flowers that would adorn my next carving. I had decided to imaging a carving that had a staff with the spoon bowl at one end and a heart at the other. The daffodils would be placed along the staff and held on with a continual rope. The imagining of the design was the easy part but how would I carve this vision.

The piece of Basswood that I would use was thirteen inches long by two inches wide, plenty for the type of carving that I had in mind. My first task was to sketch the design on a piece of paper to position the flowers, starting with the smallest nearest the spoon bowl and progressively get larger as they moved along the staff. The last flower would intersect the heart and the heart would have a scrolled link to aid in displaying the finished carving. I wanted the flowers to have stems that would be indicated as the rope wound around both the stem and the staff but would I be able to carve this and convey the intention. 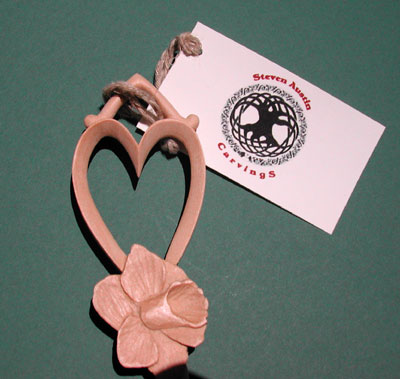 The first process was to remove all the excess material around the profile of the spoon on my bandsaw. My next step was then to carve the bowl for the spoon and I found that the Basswood carved very easily with a sharp gouge, (I don’t know why but I always start with the spoon bowl!)

In fact, while carving I found it a little too easy and care had to be taken to prevent the grain from running too far and splintering out. To eliminate some of this I decided to cut across the grain rather than with it, then finish carving with the grain.

On the back of the spoon bowl the same process was adopted and again I found the grain to react very similar to that of Mahogany with, if you take too big of a shaving the grain was inclined to tear. With Basswood, it is very easy to cut in the main shape without too much effort but this false sense of security can lead to a major problem, if the grain tears too far into the design there will be no room to rectify the shape.

Knowing this I paid plenty of attention to carving the bowl and the back of the spoon slowly, even though I wanted to forge ahead. 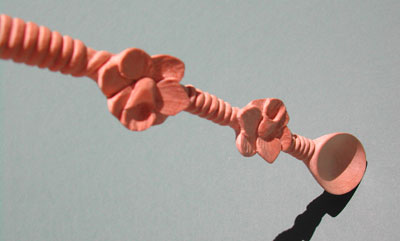 Thinking on why I always carve the bowl first, it is because this area is normally where the most material is removed and it makes sense to carve this first so there is no extra force placed on more delicate parts of the carving. If I were to carve say the heart first I could easily snap this area while carving in the spoon bowl later so carve the areas that receive the most pressure first then move on to the delicate areas last. 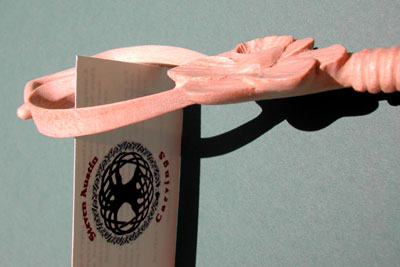 My next move was to drill holes in the areas that would have to be removed with a fret saw. In the past I had been using my Delta scroll saw but each time the blade breaks it would make me jump and that combined with the set up for each cutout far outweighs the time in using a conventional saw, that being said using the scroll saw will ensure a square cutout unlike when hand sawing.

Part of my problem is the type of blade that I am using, I prefer a spiral scroll saw blade which has a spiral completely to the end of the blade. To be user friendly for the scroll saw I need to get the flat end spiral and this will eliminate the problem of securing it tightly in the machine. The blade will clamp easily without fighting the spiral each time. 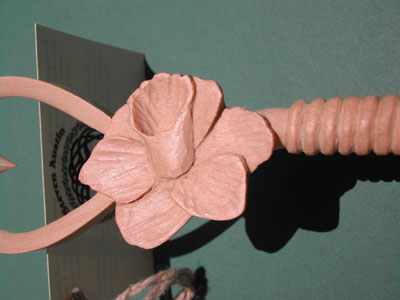 With the holes drilled I then cut out the internal material with the fret saw and cleaned the profile with the smallest spindle sander sleeves available, some 1/4 inch in diameter. In the near future it would be good to purchase an actual spindle sander such as the Jet 708404 which is perfect for little home craft projects and the type of carvings that I do.

With the cut outs taken care of I could concentrate on shaping the staff and the daffodils. I intentionally left the staff thick so that I could offset the stalk of the daffodil so that it looked like it was placed on top of the staff. First off was to pencil in the rough outline of the stalk and then carve away the material either side of the pencil line leaving a raised stalk, this I would do by using a small gouge. 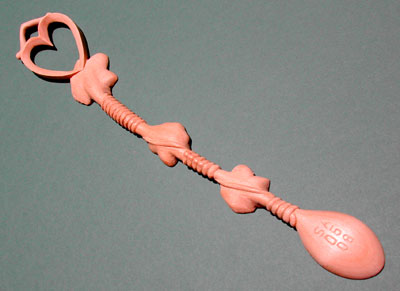 With the three stalks now shaped I needed to indicate a rope that would lash the three daffodils in place but how would I ensure that the rope was continuous and spaced equally.

To do this I used 3.0mm masking tape which is available from the paint department of most autobody shops. Starting at the base of the spoon I wrapped the tape around the staff and across the back of each flower as indicated by the photograph until the last flower where it would stop and indicate that the rope had been tucked beneath the previous loop. All I had to do now was to follow the tape with a pencil, marking in the position.

On the pencil line a score mark was made with a carving knife then cut at forty five degrees to give the indication that the rope was twined around the staff. This was continued for the entire rope effect until the back of the flower was reached, here the rope would have to cross over the flower so material was carved away forming the back of the petals leaving the rope exposed. From the photograph you can see the effect of first carving in the stem of the flowers. The rope effect following this shape gives the indication that it is lashing the stem to the staff.

The front face of the flowers were carved to give a layered effect for the petals. This is achieved by offsetting each petal slightly and by carving with a small gouge which gives a stronger three dimensional look. The trumpet of the daffodil is carved deep with a small gouge and cut square on the top edge to eccentuate the depth. If each petal is carved to give a curved effect this will add to the three dimensional look when cutting a shallow carving.

Now that each of the three daffodils are complete the heart has to be formed, for this I decided to give it a triangular section with the outer face flat and the inner surface angled to a centerline inside the heart. This gives it a nice crisp but simple controlled double heart effect, a heart within a heart. The top link completes the carving and this is a round to oval section with a ball at each end. This unique lovespoon was a satisfying project and the end result was better than I anticipated which is always good.

With each carving I’m gaining a little more knowledge about the various timbers that I use and their unique qualities. With this knowledge I can design more intricate carvings and feel confident that I will be able to successfully complete the carving without too many worries, so now that I’ve said that, what will be my next carving!